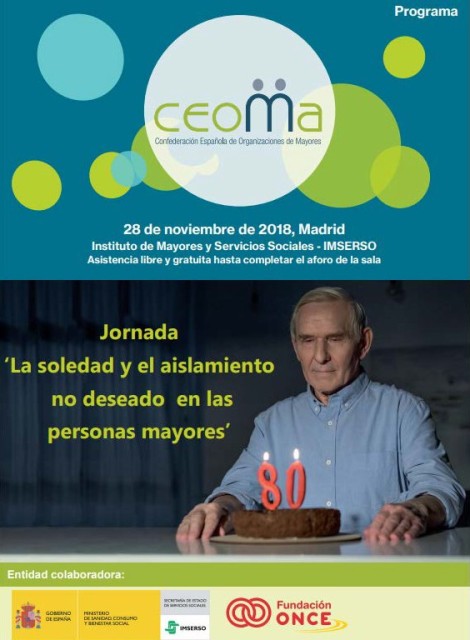 The Spanish Confederation of Older People’s Organizations (CEOMA) has recently celebrated a Technical Seminar on 'Loneliness and unwanted isolation in old age'. The Seminar was held in Madrid on the 28th of November, in the headquarters of the Institute of Seniors and Social Services (IMSERSO) which depends on the Spanish Ministry of Health, Consumer and Social Welfare. On that occasion, dozens of experts and representatives of Spanish Public Institutions looked at the problem of loneliness and unwanted isolation from many different angles, such as physical, emotional and cognitive health, etc. New models of care for older people in Europe and Latin America were discussed in order to combat these serious problems.

During the day, the Head of IMSERSO, Mrs. María del Carmen Orte, announced that the Ministry of Health, Consumer and Social Welfare, is finalizing a National Strategy against Loneliness of older people that focuses on proximity. A forum has been set up with the Third Sector, which will meet in January to finish defining the project.

In Spain, around two million people over 65 live alone, 80% of them are women. However, as the Head of the IMSERSO explained, those data refer to older people who do not live accompanied, but "you may be living in a residence with many people, and yet, be alone."
The day was closed by the Spanish Ombudsman, Mr. Francisco Fernández Marugán, who recognized that people have to learn to live in loneliness given the increase in life expectancy in Spain and the increasing number of older people living alone. The Ombudsman said "We are in a society that is experiencing a significant ageing process" and "this phenomenon cannot be ignored".