'Europe means recognizing and embracing diversity' - testimony from the UK

To mark 2018 European Year of Cultural Heritage(EYCH 2018), AGE is committed to promoting Europe’s cultural heritage and the positive role it can bring to the daily lives of EU citizens of all ages. For AGE, the European cultural heritage is about universal values we stand for as Europeans, which should help foster dialogue, mutual respect and cooperation, so that the European Union eventually gets stronger for the benefit of all its citizens today and in the future.

We have the pleasure to give the voice to of Mr Chris Walsh, from Wise Age (UK), member of AGE Council of Administration and of three of AGE task forces, who shares with us his views and feelings on the European Union and its cultural heritage.

AGE: What does being a European mean to you? Does it bring any added value in your daily life? 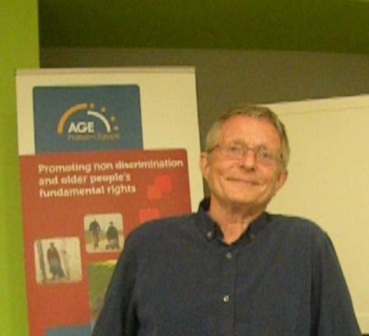 Chris Walsh: 'Being a European means being part of a democratic, secular and diverse society, able to travel, work and live across the continent. Enjoying a free life with separation between government, Parliament, law and independent media, for people of all ages.
I think I have always enjoyed being a European. I have always enjoyed travelling in Europe. I like the diversity of cultures and attitudes in Europe. In the context of recognizing our own fellows Europeans.
Having said that, I think it is important that we have an awareness that Europe now means recognizing and embracing diversity, not only of cultures and different sexualities for men and women, but also different ethnicities, different cultural backgrounds. Up to recently our acceptance of those has been one of the important aspects of our civilization and I think Europe is at the moment probably the most civilized part of the world. We recognize both the importance of the rule and separation of the rule of law, of the media, of government and that government has to be controlled by Parliament and the fact that we are a secular society that allows different religions but does not impose them. And where we have a separation between citizens and education. So, for me Europe has always been positive force on advancing rights to protect workers, consumers and citizens, monitoring high quality standards, protecting the environment and supporting equality for all groups.

As an English person, I have always believed that Europe has brought far more equality, far more social justice, far more human rights in England than we would have done within our own context, where we are still run for example by the House of Lords, which is still a 1000-year-old aristocratic tradition of dominance.'

AGE: What value, tradition, knowledge or principle would you like to convey to younger generations so they join you as active supporter of the European project?

CW: 'We should not forget that Europe has allowed us to put an end to internal European wars and that it has helped us strengthen a belief and respect for democracy and for greater equality and justice for all.

I also hope that either Brexit doesn’t take place or, if it does, that younger English people who are aware of all the benefits of Europe and all the protection and rights we have in Europe are able to then ask to return within 5 or 10 years.'

AGE: What do you think should be improved to build a stronger and sustainable Europe?

CW: 'I think the most important is that we maintain, improve and extend democracy. I think that the Parliament needs to have more power and that we should be voting on matters of great importance at a European referendum level. I think that the fact that the expansion and extension of Europe at the beginning of the century took place without any involvement of the EU members on whether they wish to have new arrivals was seriously damaging to the belief that people feel it is “their” Europe. If the democracy of Europe was a little bit more trusting of the people themselves, I would prepare to engage a political dialogue and have political discussions, then there would be a much greater acceptance by the majority of people of the changes that are being introduced.
To guarantee democracy, I also strongly believe that we need to maintain a clear separation of power between the law, the government, the Parliament and the media.

Last but not least, I furthermore think we need to have an anti-austerity Europe, we need to be controlling the banks, we need to be ensuring that it is a social Europe, with more respect for equality and diversity, is a primary focus for European development rather than maintaining austerity and the old trade relations that benefit banks and speculators as opposed to ordinary people. We need to support an economy and society for all ages, ethnicities, identities, genders and social economic classes.'