'I once had a voice...' - OKRA social media campaign calls out to new Flemish policy leaders 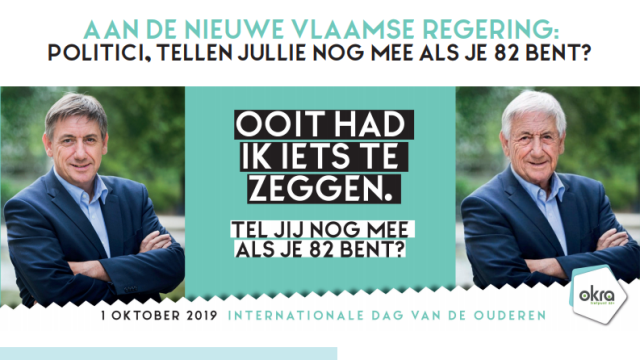 On the occasion of the International Day of Older Persons, the Belgian Flemish seniors' movement OKRA has joined forces with the World Solidarity NGO to run a striking social media action calling on policymakers to give seniors a stronger voice. The leaders of the different political parties have been taken through an ageing app and are asked the pressing question: 'I once had something to say… But will you still be heard when you're 82?'. On the other side of the world in Bangladesh, the health organisation GK makes the same appeal to their policymakers.

Health, access to care, decent pensions and mobility are the major issues of concern raised by the two senior organisations. But not only.

While the new Belgian Flemish government is taking shape, OKRA also expresses its concern about the falling average age of policy-makers, as a result of some 'professionalization' of the ‘political staff’:

Today, the number of people aged 65 and over has been declining. The average age has also fallen sharply in the municipalities, when mayors and aldermen started receiving a higher allowance. This too is a form of professionalisation that has pushed away older people, but to a lesser extent than with the Flemish and federal authorities.

However, the democratic rights should be the same for all citizens. In fact, this is not the case. For women, the so-called zipper system was introduced for this purpose, as a result of which the relative number of women in the parliaments has risen sharply".

Read OKRA’s article in Dutch on our #AgeingEqual campaign blog