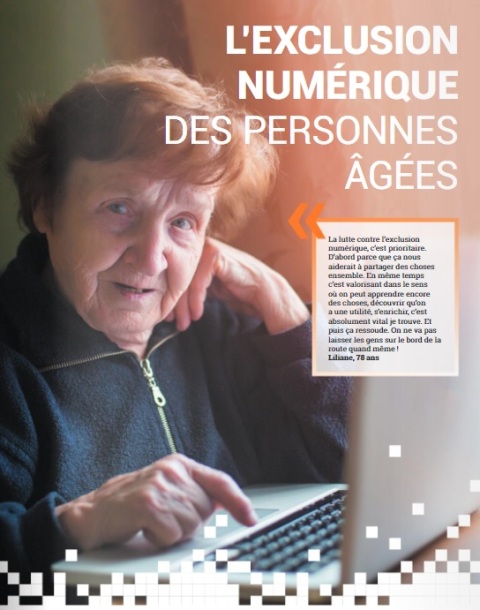 In a report published on the occasion of the of October 1st, International Day of Older Persons, the French organisation Les petits frères des Pauvres calls for a "national plan" to combat the digital exclusion of older people in France.

While digital is a key driver for social connection, more than a quarter of persons over 60 never use the Internet. This exclusion particularly affects people over 80 years of age and people with incomes of less than €1,000. But 14% of 60-70 year olds are also digitally excluded.

"Digital exclusion puts a significant number of our seniors even further at the margins of society and isolates them further in our hyper-connected world," the association warns.

The main reason given by seniors who do not seek to connect is the feeling of the uselessness of the Internet (68%), well before the technical difficulty (47%). The cost of equipment and connections is also a major constraint, especially among the most vulnerable populations.

In order to remove these obstacles, the association makes 14 recommendations (here in French). These include developing a social rate for Internet subscriptions, refurbishing companies’ unused computer equipment before donating it, but also adopting a "personalized approach" in encouraging older people to start using the Internet by awakening their interest in using it and by training them.

Once they have understood the benefits they could gain from the Internet, seniors adopt the same habits as the general population. In two-thirds of cases, they say they use it first to maintain contact with their loved ones, with e-mails or photos, and then to get information.

"For me, the Internet is very important. My children live in Ecuador and I use the Internet and WhatsApp to communicate with them, because the phone is very expensive. I can hear my granddaughter's voice," says Maria, 79, quoted in the report.

Following the publication of this report, Mr Gérard Perrier, from the organisation Générations Mouvement further provide some further comment in the online media SeniorActu on the reality of digital exclusion in old age in France and on the work done at EU level (namely by AGE in the framework of EU projects) to address the issue.