The project 'Maison de la diversité' (House of Diversity) is the first inclusive housing in France that fights against the social isolation of LGBT seniors. This project has recently obtained an investment budget of 4 million euros from the Fondation des Petits Frères des Pauvres. The first House of Diversity will soon open its doors in Lyon. 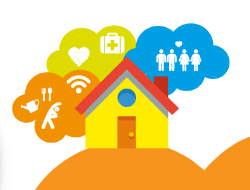 There are about 1 million LGBT seniors (people over 60) in France. Despite the positive evolution of rights and mentalities, they are still more or less marked by discrimination and face greater risk of isolation than heterosexuals, namely due to the absence or rupture of family ties, the rejection of sexual orientation and/or gender identity.

This townhouse is a place and a way of life intended mainly for autonomous or relatively autonomous LGBT seniors, anchored in the heart of the city, open to neighbourhood life, in a secure environment, free of LGBTI-phobias, in which the senior LGBT public is no longer afraid of being judged, discriminated against or stigmatised.

The House of Diversity is a co-designed collaborative project project that relies on those who share their experiences and and aspiration.