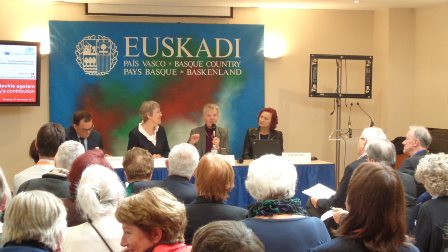 Together the World Health Organization, the European Commission and the Delegation of the Basque Country to the EU, AGE organized on 7 November a conference on the EU Contribution to WHO Global campaign against ageism. This event was the opportunity to shed light on the issue of ageism and to examine what more can be done at EU level to combat it and to contribute to the World Health Organisation (WHO) global campaign against ageism. The event brought together about 70 participants, including WHO and EU officials, representatives of local and regional authorities and civil society organisations, among them a large number of AGE members.

As explained by Alana Officer (WHO), ageism, the stereotyping and discrimination against people on the basis of age, is a serious social prejudice with significant consequences in particular for older people. It also creates barriers to developing effective policy on ageing. According to the World Health Organisation, ageism is highly prevalent worldwide and remains unchallenged in society largely because it is socially accepted and entrenched in institutions. This is why the World Health Assembly – WHO’s decision-making body - adopted in May 2016 a resolution on the Global strategy and action plan on ageing and health calling for the development, in cooperation with other partners, of a global campaign to combat ageism.

Then the different speakers brought forward what has been done and should be done at EU and global level to address age discrimination in older age and showed examples of initiatives at national and regional level. For instance, Liat Ayalon presented the work carried out in the COST action on Ageism which gathers a large number of researchers working on this issue. Anne-Sophie Parent explained about the work carried out by AGE through the Madrid International Plan of Action on Ageing review and the UN Open End Working Group on Ageing. A panel was dedicated to concrete examples of initiatives in Sweden, Austria and in the Biscay Province (Basque Country, Spain). Also participants in the room, in particular AGE members, seized the opportunity to highlight the situations in their respective country and point at some examples of discrimination. Last but not least, a second panel was the opportunity to discuss a number of initiatives led by the European Commission, as well as the role of local and regional authorities and civil society organisations to contribute to this agenda.