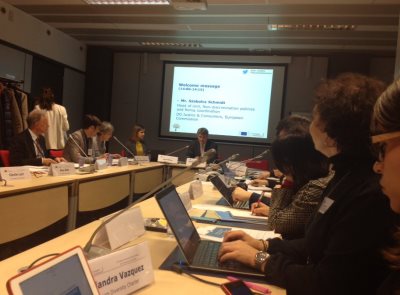 Anne-Sophie Parent, AGE Secretary General, participated at a meeting of European Diversity Charters in Brussels on 9th February 2017. Diversity Charters are voluntary initiatives in a number of EU member states to promote diversity inside companies. Ms Parent and the European Youth Forum’s Marianna Georgallis addressed the representatives of the charters to highlight the importance of age discrimination.

Older workers: a value for companies and colleagues

Age discrimination can be felt by simply looking at the numbers: among the 55-64 year-olds in the EU, only about half (52 %) are in employment, and very large gender gaps are behind this number. Older workers are more likely to be long-term unemployed when they lose their job than any other age group. Anne-Sophie Parent emphasised the value older workers bring to a company: bringing experience, forming the memory of a company and having a role in training younger employees. She highlighted that demographic change finds some companies unprepared, while age-friendly workplaces could allow them to keep their employees for longer. Anne-Sophie Parent also outlined the interaction between the employment of younger and of older workers: in countries where many older people work, youth unemployment is also relatively low. New schemes should be found to promote intergenerational exchanges at work.

Marianna Georgallis from the European Youth Forum explained the challenges of younger persons. The crisis has meant for many young people to find themselves in unemployment, underemployment and precarious contracts. Also, there is a multiplication of forms of internships and apprenticeships that do not comply with quality standards: they might range from just photocopying to being an actual full – underpaid and underprotected – colleague. The Youth Forum therefore has a campaign to establish quality criteria for apprenticeships, and for making the existing quality criteria for internships more binding. Another example of age discrimination against younger workers is that many minimum salary regulations apply lower minimum wages to young people – or exclude them altogether from minimum wages.

The meeting showed that many common concerns exist between younger and older workers to make workplaces more inclusive for all. Ana Nieto Montero from AXA Spain presented initiatives on internships and mentorship at AXA that concretely showed how companies can create inclusive environments for all ages.