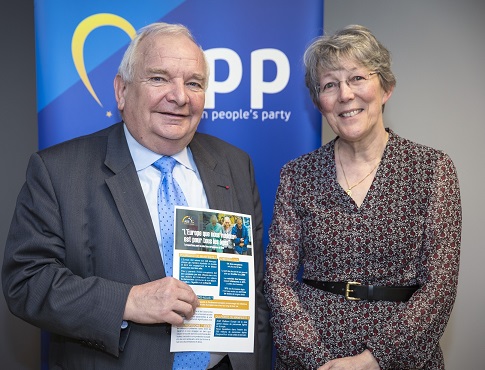 On 19 December 2018, AGE Secretary-General Anne-Sophie Parent was invited to meet the President of the European People’s Party (EPP), Mr Joseph Daul and the Deputy-Secretary-General of the party. She discussed AGE expectations regarding the EU action to combat age discrimination and ageism, foster older workers’ access to the labour market, allow older persons to combine work and pensions and promote access to quality health and long-term care. Most proposals were met with enthusiasm by the EPP President.

Need to fight age discrimination as a clear signal to citizens

Ms. Parent outlined the challenge of clearly explaining to voters, especially older voters, what they can expect from the European Union and these elections, and how the European Parliament can influence older people's lives. A concrete measure for this would be to make the fight against age discrimination and other grounds of discrimination more visible in EU internal and external action.’

‘Caring for older people and their place in our societies is an important concern for the EPP’, Mr. Daul told AGE. ‘We must make sure that all generations can fully participate in the labour market and that nobody is discriminated because of age. We need safe and equitable pensions – for today and for future generations. Everybody should be able to live in dignity and to participate fully in our societies.’

As Ms. Parent explained, combating age discrimination is also key for changing the perception of ageing and allowing older people to work for longer if they so wish. The EPP President agreed that it is a nonsense to prohibit working after retirement, as many sectors are lacking skilled workforce and work realities have changed in some sectors, making work less strenuous.

Both agreed that the EU has a role to play here. Ms. Parent shared some examples where AGE’s policy work has been decisive: in access to supplementary pensions, AGE successfully lobbied for reducing the vesting periods that workers need to start acquiring pension rights, a measure that benefits many younger workers who have much shorter job tenures in today’s labour markets.

Gender equality and solidarity between generations

Discussions also covered the crucial role of solidarity between generations, a key principle for AGE, as older people are first and foremost interested in the well-being of their grandchildren. Transformations such as the growth of new types of employment, that leave many young people without access to pension, unemployment or health insurance rights are a big challenge to them.

Furthermore, Ms Parent stressed the questions of gender equality, pointing out the large pension gap between women and men remaining and some pension reforms going against the idea of gender equality, such as the reintroduction of different pension ages for women and men. Both agreed that survivor’s pensions are an important right safeguarding many older women from old-age poverty.

The EU’s role in health policies

On health policies, Mr. Daul and Ms. Parent exchanged on the evolution in the European medicines market. Europe is more and more dependent on imports for basic medication, which poses not only a challenge for European jobs, but also for security from shocks in world trade and challenges for the security of drugs itself. This is a key area where the EU could take action to avoid shortages.

Mr. Daul and Ms. Parent convened that they would like to collaborate further to encourage older citizens to make an informed vote in this year’s European Parliament's elections.