AGE responds to the European Semester: a sound reaction to the COVID-19 pandemic, but with many blanks

To address Europe’s demographic change, the challenges faced by older age groups need to be better targeted by EU policies, namely in the areas of long-term care, employment and gender equality. While health receives a lot of attention in the EU recommendations to member states, this is striking to see that long-term care is by and large forgotten despite the serious shortcomings revealed during the COVID-19 pandemic in health care facilities across Europe. 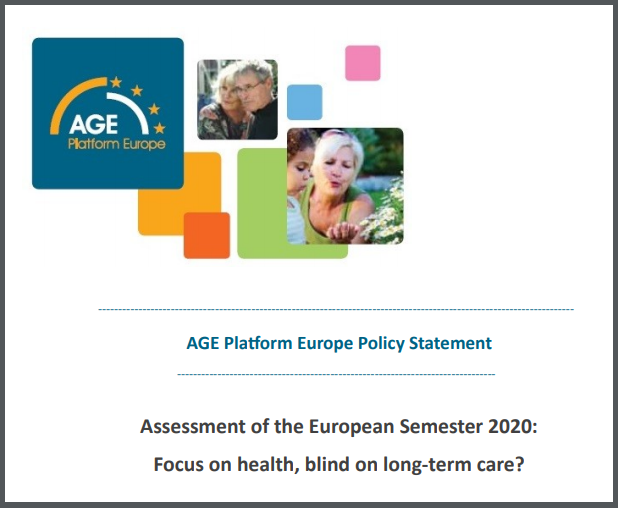 This could sum up the main message of our response to the European Semester 2020, the EU‘s annual cycle during which Member States coordinate their social and economic policies. This years‘ process, the first under Ursula von der Leyen‘s European Commission, has been shaken up by the COVID-19 crisis. AGE identified that while the immediate reactions to the crisis in the Semester were the right steps to take, there remain some blind spots that will be crucial during the recovery: the conditions and affordability of long-term care, older workers are no longer mentioned as a priority group for labour market policies and the focus of gender equality policies seem to target mainly younger women.

The COVID-19 pandemic and response have triggered a profound economic crisis, and the European Union has learned some of the lessons from the past by triggering the 'General Escape Clause‘, allowing for larger spending by Member States to fight the pandemic and moving towards the adoption of a ground-breaking recovery fund and medium-term EU budget. The Semester is taking the EU‘s environmental commitments and the European Pillar of Social Rights and its 20 principles more seriously and in response to the health crisis, universal and inclusive health policies have been prioritised. The Commission has put an accent on the inclusiveness of social protection systems, which is also to be welcomed.

While health receives a lot of attention in the recommendations to Member States, there is no mention of long-term care. This is shocking, as evidence is showing a dramatic situation in care facilities, in some member states with more than half of COVID-19 fatalities happening in care homes. Residences have been denied access to protective equipment, tests and medical treatment of patients during the pandemic, coming on top of already overburdened staff. AGE urgently calls for addressing these shortcomings, but also not to forget persons and staff who care for people in their homes, who often have not been considered front-line during the pandemic.

There is a push for more inclusive social protection schemes to respond to the economic downturn, such as the extension of social protection to atypical forms of work and self-employed, and the introduction of temporary unemployment schemes, the EU also encourages access to life-long learning. There is however no mention of older workers as a target group for these policies, despite their risk of being part of collective dismissals (namely through pre-retirement) and long-term unemployment.

The ‚greening‘ of the European Semester is pursued by encouraging public investments towards the ecological transition. AGE highlights that little mention is made of the types of investments to be pursued, and emphasises that green investments with a social impact should be priorities, such as into low-energy housing. The adaptability of housing funded by new public investments for the needs of independent living should also be underlined. This is to ensure that newly built or renovated housing is adapted to the needs of an ageing population.

The position on the European Semester also highlights AGE‘s more general proposals for a recovery following the principle of solidarity between generations and its observations and recommendations on the human rights of older persons during the pandemic.