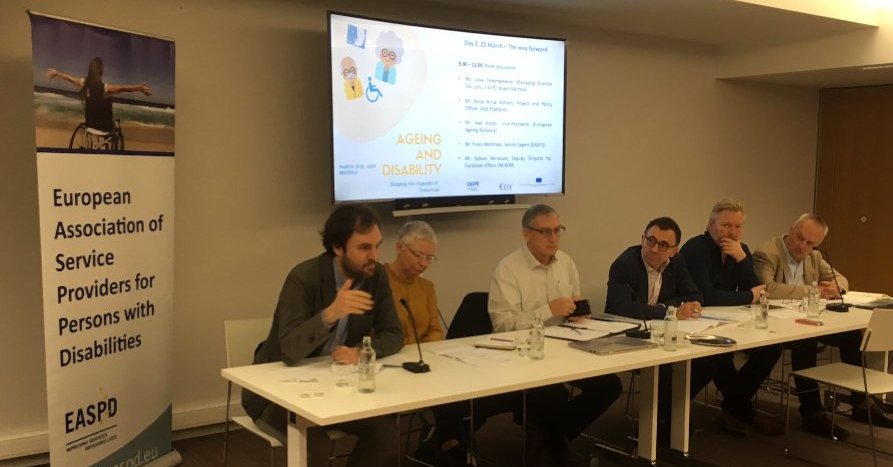 On 21 and 22 March we were invited to take part in the conference Ageing and Disability: Shaping the Agenda of Tomorrow, organised by the European Association of Service Providers for Persons with Disabilities (EASPD). The two-day conference took place in Brussels, and involved EASPD members as well as several service providers and academics.

Ageism: a further layer of discrimination that affects people with disabilities

The conference aimed at exploring the intersection between disability and ageing. As our Ageing Equal campaign highlighted, older persons with disabilities face great challenges to live in dignity and equality. As they reach a certain age, people with disabilities may lose their access to support services as often they are no longer considered as a person with a disability but as an “old” person. Similarly, people who acquire a disability in older age (for instance, following an accident) may not be considered as people with disabilities. Those breaches of the principle of equality demonstrated the prevalence of ageist attitudes in society, as Borja Arrue, AGE’s Policy and Project Officer responsible for long-term care, highlighted during the conference. He further pointed out that those situations add a layer of discrimination, stereotyping and prejudice based on age to people who already face similar issues in relation to their disability. He called on further cooperation between organisations of older people and of people with disabilities to improve the awareness of common and specific challenges.

Human rights in older age: the need to act

The conference showed the great impact of the UN Convention on the Rights of Persons with Disabilities on how services are organised. Likewise, it showed the gap that exists in terms of understanding the implications of ageism on the enjoyment of human rights. In our comments and reactions at the conference, we invited participants to get informed about the discussions taking place at the UN Open-Ended Working Group on Ageing and to collaborate with organisations of older persons.

Are you a service provider or an organisation of persons with disabilities willing to better understand the realities of older people in need of care and support? Are you an AGE member or another organisation interested in knowing more about older people with disabilities?
Do not hesitate to contact Borja Arrue, Project and Policy Officer responsible for long-term care, borja.arrue@age-platform.eu, or Nena Georgantzi, Human Rights Officer, nena.georgantzi@age-platform.eu