Economic inactivity 50 % higher for older workers than for others 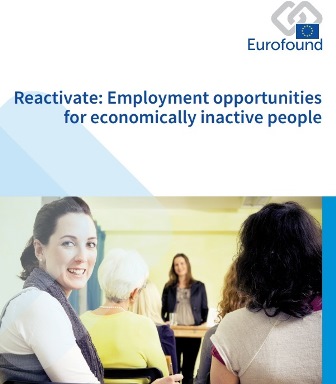 The European Foundation for the Improvement of Working and Living Conditions (Eurofound) has released a report on inactivity policies to reduce it in Europe. The report entitled 'Reactivate: Employment opportunities for economically inactive people' points out that one in four EU citizens of working age (27 % of 15-64 year-olds) are economically inactive, meaning that they are not in employment and not looking for it. For older workers (55-64), this figure is 50 % higher, at 41 %. Although inactivity has declined steadily in recent years, progress is only very slow.

Inactivity means that persons are neither looking for a job and nor working – people in education and training, as well as retirees are considered inactive. Therefore, inactive people do not figure in unemployment statistics, which only cover persons in employment or looking for a job. The Eurofound research has found that important gender differences remain also for older workers: while 33% of older workers are inactive, this percentage reaches 48 % for older women. Inactivity rates of older people also vary according to the country: it exceeds 55% in Slovenia, Luxembourg, Croatia, Romania and Greece, while remaining below 30% in Sweden, Germany, Estonia and Denmark.

The report points out that older people’s inactivity is often linked to low hiring rates. The fact that older peoples’ inactivity rates are receding is mainly linked to generational effects with people staying longer in their jobs due to higher pension ages, and women with higher employment rates moving into the older categories, while a generation of women with lower employment rates during their working lives are moving into retirement age. However, other reasons for high inactivity are also pointed out:

The report lists a number of policy measures that could help reducing inactivity. The first is to make inactivity visible as an indicator in economic governance mechanisms. Also, Eurofound recommends acting again on the Active Inclusion Recommendation of 2008, which recommended tailored approaches consisting of active labour market policies, income support and provision of adequate support services as a way to activate people. Upskilling measures can prove particularly important to increase employment rates.

AGE welcomes the report and finds many of its demands underpinned by it. Allowing a combination of pension and employment, investing into life-long learning, including for older people, providing quality long-term care services  and building capacity in local public services, such as employment services, will be beneficial in allowing older people who have given up looking for a job to try to find employment. More importantly, ageist stereotypes are still prevalent among employers and service providers, who find it particularly challenging to work with older jobseekers, and this is internalised by many older jobseekers, who are discouraged and lack confidence in their own skills. AGE therefore calls for more coherent strategies specifically for older jobseekers and older inactive people.