Our assessment of the 2014 Council of Europe recommendation showcases that the non-binding nature of the recommendation paired with very limited public awareness have not triggered any serious governmental action to promote and secure the rights of older persons. 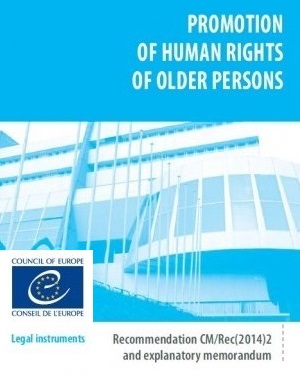 In 2014 the Committee of Ministers of the Council of Europe (CoE) adopted Recommendation CM/Rec(2014)2 on the promotion of human rights of older persons. This is the first time a legal instrument of the Council of Europe has developed a document based on the human rights of older persons. The main message of the Recommendation is the necessity to assure that older persons can enjoy fully and on an equal footing with other individuals their rights and liberties guaranteed by the European Convention on Human Rights. The CoE is currently examining the implementation of this recommendation and AGE was invited to submit our views regarding its impact at national level and regional level.

AGE has been largely involved in the drafting and the dissemination of this important regional instrument. However evidence from our members across the EU illustrates that national efforts to put the recommendation have been largely inadequate. Older people’s organisations lack substantial information about the practical implementation of this document.  Most countries have not translated its text in local language, which considerably limits public awareness about its provisions. Neither have NGOs been consulted or involved by national authorities about the ongoing review of the recommendation.

Lack of evidence of real impact on the ground

Our members highlight that the recommendation has failed to consolidate older people’s rights in national and EU agendas. There is no evidence of human and financial resources attributed to the application of this instrument. Against the background of economic austerity national measures are far from being appropriate and adequate and older people’s challenges are systematically deprioritized.

The Council of Europe will gather information from various stakeholders and will also hold a workshop in June to discuss the findings. One of the possible follow-up actions would be the adoption of a binding instrument, as suggested by the Parliamentary Assembly of the CoE (PACE). A binding framework would be better equipped with the legal strength and political teeth to drive change. It could also more appropriately make links with other instruments - such as the Madrid International Plan on Action on Ageing (MIPAA) - and provide for comprehensive and efficient monitoring.

You may read AGE’s assessment here