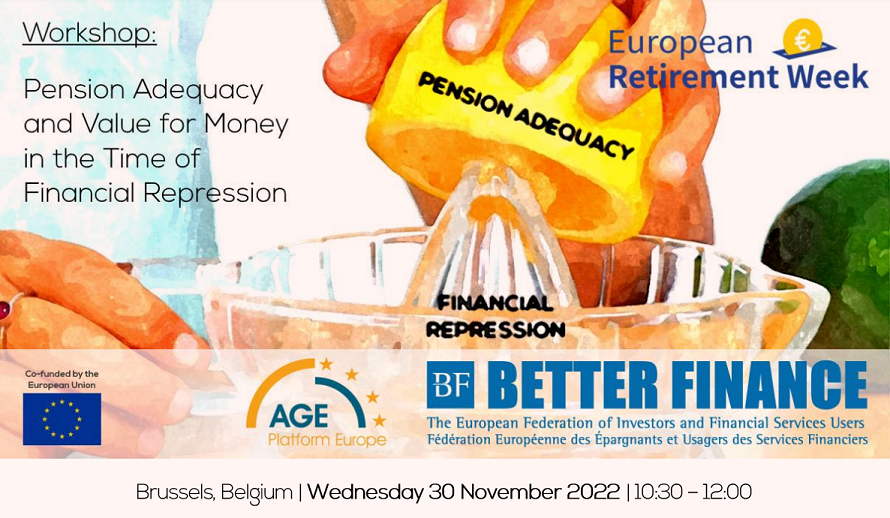 As inflation is cutting into older persons’ budgets, the issue of adequacy of pension is highly relevant. This was the theme of a recent joint event in which we called for a broader approach to investment in ageing and greater support for statutory social protection.

As part of the European Retirement Week, we co-organised an online event with Better Finance, focussing on pension adequacy in an era of financial repression. Alongside the high-level speakers, MEP Sirpa Pietikäinen and MEP Antonius Manders, the purchasing power of all pension pillars was discussed by Valdis Zagorskis of the European Commission’s DG for Employment and Social Affairs, Didier Millerot of the DG for Financial Stability, Financial Services and the Capital Markets Union, Better Finances’ Director Guillaume Prache and Philippe Seidel of AGE Platform Europe.

What is pension adequacy and how is it currently affected?

Philippe Seidel defined what AGE means by the adequacy of pensions: ensuring a life with dignity, not just above the poverty threshold, but a life where one’s contributions are adequately valued and where solidarity mechanisms ensure that also those who were not able to participate fully in the labour market during their career – for reasons of informal care, childcare, sickness or prolonged unemployment spells – can still benefit from a decent old-age income. AGE Policy Officer underlined the social contract that is embodied by pensions, something only the statutory, first-pillar pension system can fully provide.

Mr Seidel underlined that in many policy responses to the recent inflation surge, older persons have been forgotten or treated less favourably than others, which emerges from AGE’s research on the cost-of-living crisis.

Mr Zagorskis insisted that while labour income has on average suffered from recent crises through increasing unemployment during the 2008-2014 financial crisis, or reduced wages due to short-term unemployment schemes during the pandemic, pension incomes have proven remarkably robust – they usually do not adapt very well, making them an automatic stabiliser in crises. However, this makes them vulnerable in the inflation context that we are experiencing nowadays, because they need more time to catch up.

The discussion focussed on the low performance of funded pensions. Mr Prache, building on the research ‘Pensions: the real return’ by Better Finance underlined that deceptive performance and costs are eating up the benefits of many pension funds. However this is often not perceived due to money illusion - the illusion that the value of money remains the same.Yet, with low and at times negative interest rates since several years, alongside even low inflation, money loses value, in particular when inflation surges again, such as in the current context. In the 80s, when Europe was last living with high inflation, interest rates were also high – this is the first time that such a prolonged period of financial repression is happening. Mr Prache complained that it becomes more difficult to undertake an exercise to assess the value of pensions, as the European Securities and Markets Authorities and others stop publishing some of the returns of pension vehicles.

Mr Millerot understood the concerns voiced by Mr Prache and said that there is an ongoing assessment and that some pension products might need to be removed from the market in the future.

How to ensure pension adequacy in the future?

Looking at the future, the debate focussed on the policies that need to be led to ensure sustainability of pensions. Mr Zagorskis said that it might be necessary to have longer careers, and it is in large part already happening through more labour market participation of women, also in older ages. But reforms must carefully take into account those who are unable to do this. The impact of COVID-19 on career length will be one of the topics looked at for the Pension Adequacy Report 2024.

Mr Seidel looked into the future by calling for more holistic policies around ageing, as pensions are one challenge for public spending with the demographic change in our societies, but that investment has also to be taken in healthy living, health promotion at all ages and prevention to avoid soaring costs in the field of health and long-term care. This shows that the ageing debate cannot be reduced only to the issue of pensions.

Ms Pietikänien, opening the conference, had a word on intergenerational solidarity by underlining the importance to make investments in pensions (and beyond) environmentally sustainable, to foster a positive future for younger generations.
Mr Manders called for more harmonisation of pensions across the EU, all while building robust frameworks to prevent insolvencies of pension funds. He insisted that an adequate pension is not a privilege, but the culmination of a long life of contributions.