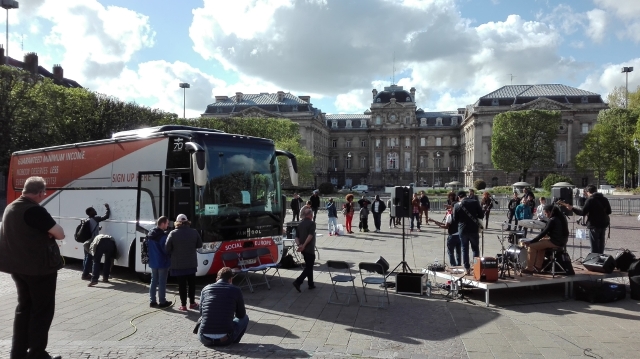 The European Minimum Income Network (EMIN) has started a bus tour through Europe to promote the discussion about adequate minimum income schemes on national and EU level. AGE member Les Petits Frères des Pauvres organized a European seminar on minimum incomes in France and Europe in Lille on 25 April 2018, AGE was present. 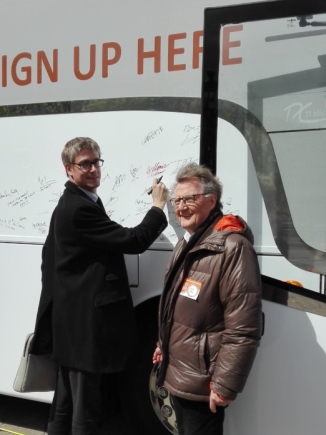 Jean-Pierre Bultez of Petits Frères des Pauvres and the regional poverty observatory UNIOPPS Hauts-de-France highlighted the importance of a European debate on minimum incomes. It is often unclear which minimum income scheme is available for different kinds of situations (long-term unemployment, disability, retirement, long-term sickness benefits etc.). All have different modalities and finding their way is difficult for beneficiaries. Also, minimum incomes are often not set taking into account the necessary goods and services needed to live in dignity.

Olivier Noblecourt, inter-ministerial delegate for the prevention and the fight against poverty addressed the audience calling for a stronger social face of Europe, ‘I am of a generation where we have been waiting for social Europe since 25 years, it is almost like waiting for Godot. We should put some flesh on this idea’. He outlined the philosophy of the French government that minimum incomes are not the sole solution to fight poverty, but that there needs to be a better coordination of public services and an effective guidance of beneficiaries. However, social minimum incomes and their indexation are part of the governmental reflection to fight poverty. Non-take up of social benefits could be tackled for example through data mining. A pillar of the government strategy will look at how beneficiaries of social minimum incomes can be better accompanied towards employment via social services, in particular in the access to training. Existing experiments such as ‘territories without long-term unemployment’ will be developed and upscaled.

Experiences from living at risk of poverty

A group of women experiencing poverty reported from a discussion with their peers. Especially the problems of single mothers and families where stressed: many cannot afford to buy clothing, using social food banks and charities that hand out food and clothes is often demeaning. When adult children start working, social benefits are reduced, although it is not their role to fill the role of a breadwinner for their siblings and parents. It is often expected from potential employers and social services to be available for work or meetings without notice, but living with minimum incomes means that life is a, complicated and administrative daily struggle – it is not self-evident to find time for employment or job-seeking.

Estelle Rodes, president of the neighbourhood Lille-Moulins highlighted that the contribution that beneficiaries of minimum incomes bring to society, in terms of volunteering and providing childcare and care to older family members, is often underestimated and should be recognized. Richard Delplanque, former beneficiary of the French minimum income scheme and administrator of EAPN Europe underlined that while health care appointments are reimbursed for beneficiaries, medicines and medical devices are not, which impedes access to adequate health care for people experiencing poverty. He also criticized the digitalisation of social services, where beneficiaries who cannot afford to have their own internet access and devices are forced to queue behind the too little public terminals provided. Access to banking is also restricted, as most banks refuse their services to beneficiaries of minimum incomes without a certificate of the national bank that they need a free bank account. Because of stigmatisation, exclusion of beneficiaries and administrative complications to request minimum incomes, the charity ATD Quart Monde estimates that about 30% of those who would qualify for minimum income schemes do not request them.

While many older people on minimum income benefit from minimum retirement schemes, and therefore are not expected to be available to the labour market, older workers in situations of inactivity and long-term unemployment face this problem: labour markets exclude them because of age discrimination, while social services could cut their benefits because of insufficient job-seeking activities.

Also, health exclusion is very important for older people, as not all health care costs are covered by the public health insurance (‘Couverture médicale universelle’) and with growing health problems, the costs for non-reimbursed services, medicines and medical devices increases. For people just above the qualification level of income for minimum incomes, it is especially difficult as they have no coverage by the public scheme, but not enough resources to cover themselves with private insurance, which is very expensive with higher age.