Link to the press release (Mailchimp) 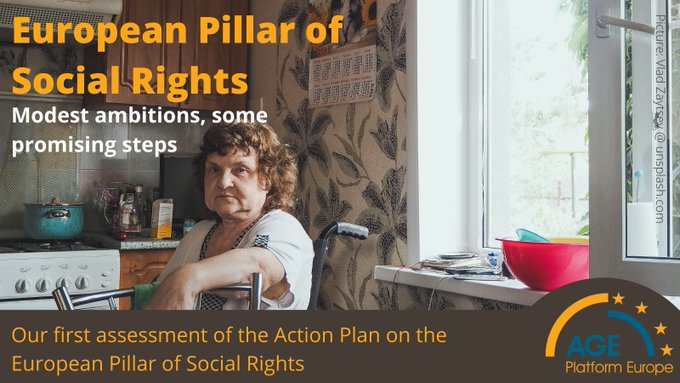 Today the European Commission has released the long-awaited Action Plan, which is supposed to put the European Pillar of Social Rights into action.

The Pillar was proclaimed by all EU institutions in November 2017. Ever since, AGE has worked actively to give shape to the 20 social rights proclaimed as part of the Pillar. This includes our contribution to the consultation on which the Action Plan is supposed to build.

Before publishing a more detailed analysis of the Plan, we share our first reaction, focusing on the rights to long-term care and pensions, as well as governance.

Long-term care: we remain in the dark – with a little light at the end of the tunnel

Although the Action Plan recognizes the importance of long-term care for the future of Social Europe, it postpones the announcement of more ambitious EU action in this area. This may be to avoid shortcutting the ongoing consultation on the Green Paper on Ageing, which also deals with long-term care.

However, a stronger case on EU’s added value and role, including on indicators of access and quality as well as targets, would have been welcomed. In a context where COVID-19 has brought to the forefront the very tragic and explicit shortcomings of Europe’s long-term care systems, we would have expected a stronger narrative highlighting why the EU needs to act on care, here and now.

The Plan does announce that the European Commission will “propose an initiative on Long-Term Care in 2022 to set a framework for policy reforms to guide the development of sustainable long-term care that ensures better access to quality services for those in need”.  Without any further details and any stocktaking on the progress that Commission services have done on different fronts – the abovementioned indicators, the outcomes of the joint work with the OECD on social protection for long-term care, etc. – we have the feeling that we remain in the dark for the months to come.

On the positive side, the Plan does announce a significant innovation: Commission proposes the inclusion of two indicators on long-term care in the Social Scoreboard, one on social expenditure (% of GDP) and another on the coverage of long-term care needs. This is a very promising development on which AGE will deliver a more detailed reaction.

Regarding principle 14 on minimum income, the announcement of a Council Recommendation is a promising development. We believe that this should also cover minimum pensions as a form of minimum income, as well as the accrual of pension rights during periods where citizens have to rely on minimum income. However, soft-law recommendations from the past have not been implemented and there is a real need for a Framework Directive on minimum income.  Besides the funding provided by ESF+, the Recovery and Resilience Facility and some other, relevant but sectoral initiatives, there seem to be no proposal for coordinated actions to address poverty and social exclusion.

This lack of coordination beyond the announced recommendation is in stark contrast with the announced headline target on reducing poverty and social exclusion by 15 million by 2030, which represents a reduction of poverty by 16% - while the EU’s commitment under the Sustainable Development Goals is to half poverty within this timeframe.

The Action Plan stays entirely silent on principle 15 on old-age income, here again probably because of the ongoing consultation process of the Green Paper on Ageing. However, the technical accompanying document mentions the running efforts to draw up the 2021 Pension Adequacy Report and the conclusions of the High-Level Group on Supplementary Pensions, notably its recommendation to introduce care pension credits in occupational pensions. The Action Plan is a lost opportunity to address this recommendation, the unacceptable high gender pension gaps, as well as the high poverty and social exclusion rates of pensioners in some EU member states.

Governance: we need the full inclusion of the Pillar in the European Semester

Ensuring a meaningful implementation of social rights requires a more inclusive European Semester process. The Action Plan recognises the need to improve the integration of the EU Pillar of Social Rights in the Joint Employment Report (JER), and more precisely the Social Scoreboard. Here again, we hail theCommission’s proposal to include two indicators on long-term care in the Social Scoreboard, which, if implemented properly– with a focus on access and quality –, can be a game changer.

Yet, the Action Plan mentions that the JER “will focus on relevant Pillar principles”. Are there principles that the Commission considers to be ‘irrelevant’? In AGE’s views, to be serious about social rights, all rights should be monitored and measured – there can be no cherry-picking and no hierarchy between social rights.

We will deliver a more detailed analysis of the Action Plan, including on other principles, in the coming days. In the medium term, AGE commits to continue fighting for the most meaningful implementation of the Pillar – including ensuring the Commission keeps up to expectations and raises EU’s level of ambition.