To keep their energy, older people need support- International Day for the Eradication of Poverty

The rising prices are exposing older people to a higher risk of poverty and social exclusion, particularly those on low incomes, as show the findings of our survey, published today on the International Day for the Eradication of Poverty. Immediate and long-term measures to ensure adequate pensions are more critical than ever.

On the International Day for the Eradication of Poverty, AGE Platform Europe is releasing a members’ survey of about the impact of rising prices on older persons and the adequacy of governments’ responses to it. 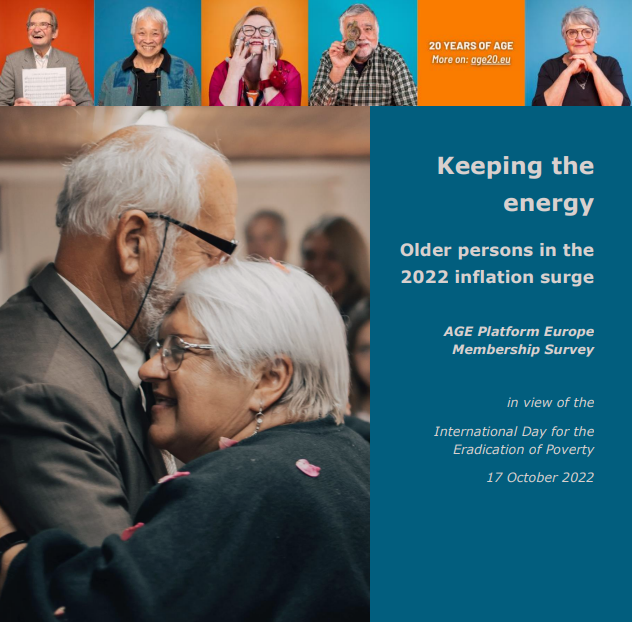 ‘The collected testimonies from across Europe show that many older persons are struggling with rising energy bills and other costs of living’, said Maciej Kucharczyk, Secretary-General of AGE Platform Europe. ‘Some can move out of their house for more energy efficient housing, but this is not an option for the almost one in five people living at-risk of poverty and social exclusion. We also hear that older persons are cutting on their social activities and support to their grandchildren to cope with the costs. Therefore, it is vital that pensions and minimum income support keep up with the rise in living costs.’

Older persons, especially older persons with lower incomes, are more vulnerable to inflation, as they are often entirely dependent on State decisions about pension levels, without possibilities to top up their income. On the expense side, it is very difficult for them to move towards more recent and energy-efficient housing or to renovate. This is true for tenants, but also for older homeowners, as older persons have more difficulty in accessing mortgage credits. Similarly, a larger proportion of older persons live in rural areas and have more needs for individual, fuel-based mobility due to weak public transport networks.

Despite the specific difficulties they face, older persons are sometimes forgotten in the policy mix of adaptive measures that governments have taken to mitigate the cost increases – one-off payments, tax breaks or fuel subsidies. In the paper released today, AGE calls on the European Commission and member states to

We insist on the urgency of ad hoc adjustments of pensions to keep them adequate in the current context. In the medium and long term, it is needed to assess regularly and, if needed, revise pension levels and to better include older persons with low incomes in energy saving investments.

AGE will present the results of the report on 30 November during the joint event “Pension Adequacy and Value for Money in the Time of Financial Repression” organised together with Better Finance as part of the European Retirement Week.

The Commission has recently proposed a draft for the Council Recommendation on Adequate Minimum Income. While AGE regrets that the Commission has not taken a more ambitious step towards a Framework Directive on Minimum Income, we welcome this initiative and will accompany the process towards its adoption to ensure that the principles of adequacy, accessibility are reinforced and the fight against low take-up of benefits is stepped up.