The Madrid International Plan of Action on Ageing should be used to trigger policy change and improve the situation of older people!

AGE Platform Europe (AGE), warmly welcomes the conclusions of the report of the UN Independent Expert on the Enjoyment of All Human Rights by Older Persons. On the basis of feedback received from older people’s organisations in the 28 EU member states AGE is launching a report on the impact of the Madrid International Plan of Action on Ageing (MIPAA or Madrid Plan) on the lives of older people. 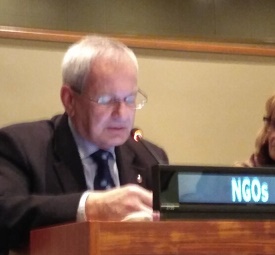 “Evidence from the grass-roots level points out to the worsening of social realities in old age, in particular in access to services such as health and long-term care”, said Ebbe Johansen, AGE Vice President, at the occasion of the exchange with UN Independent Expert on 13 December in New York. “Due to the lack of binding effect and dedicated implementation and monitoring mechanisms, the MIPAA failed to trigger policy change. National governments deal instead with the obligations arising from other existing laws and policies at national and EU level. Progress achieved is largely due to EU-based processes, such as the European Year 2012 on Active Ageing and the EU directives, rather than to the MIPAA”, stressed Ebbe Johansen.

All in all, the MIPAA implementation has not addressed the full spectrum of rights of older people but instead focused on policies which lead to savings in public spending. Moreover, the process is not sufficiently known and used by older persons and other stakeholders. Despite the MIPAA’s aspirations to actively involve older persons in policymaking, most governments either do not consult them at all, or do so only on a case-by-case basis, thus lacking genuine bottom-up approach. They are making practically no efforts to increase awareness of the Plan; for example in some countries MIPAA documents are available only in English. Consequently, even those who wish to be involved are discouraged to do so.

We thus witness a gap between what governments think they are delivering and the real-life experiences of older people in those countries. Therefore, AGE recommendations converge with those of the UN Independent Expert, in particular that a new binding instrument, such as an international convention will be necessary to better protect human rights in old age.

‘We hope that AGE report presenting our members’ assessment of the MIPAA implementation together with their recommendations will help identify areas where further action is needed and facilitate the discussion during the ministerial conference on the MIPAA review in September 2017 in order to improve the outcomes of the MIPAA in the future’, concluded Anne-Sophie Parent, AGE Secretary General.