FUTURAGE aimed to produce the future oriented definitive Road Map to guide European research on ageing and health for the 10 years to come. It undertook the most extensive consultation ever conducted in this field and to mobilise not only the leading scientists but also the stakeholders, including funders, industry, policy makers, practitioners and older people, who will discuss and decide on the Road Map.

Already several successful Coordinated Actions and projects under FP5/6/7 have been undertaken; this is why FUTURAGE intended to bring together and build on these previous initiatives and avoid replication. Thus, FUTURAGE represented a broad partnership between: the main coordinated actions under FP5 and FP6 (FORUM, LINK-AGE and AGE-ACTION); major integrated and other projects under FP7; the WhyWeAge consortium; representatives of older people, and; the existing ERA-AGE consortium (the European Research Area in Ageing).

Building on a series of national consultations undertaken in the 13 countries that form the ERA-AGE-European Research Area in Ageing 2, FUTURAGE planned extensive workshops among scientists and stakeholders focusing on 4 scientific themes:

as well as on user involvement, as a transversal issue. Outputs from the consultation process held during the FUTURAGE workshops were explored during two stakeholder meetings where research funders, policy makers, practitioners in the ageing field and representatives of older people will examine ways to coordinate the various disciplines engaged in the ageing research. Furthermore, a Council of Scientists will provide advice to ensure the Road Map delivers a viable and realistic strategy for high quality research.

The overall presentation of the project and its findings in  PDF 2 pages, also available online here:  https://www.sheffield.ac.uk/polopoly_fs/1.227916!/file/Research-briefing_futurage.pdf 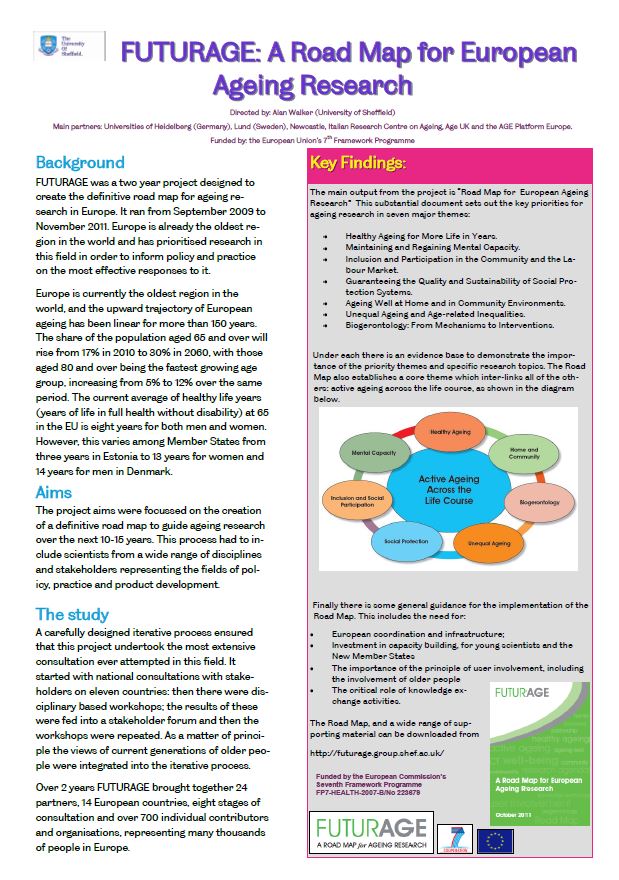 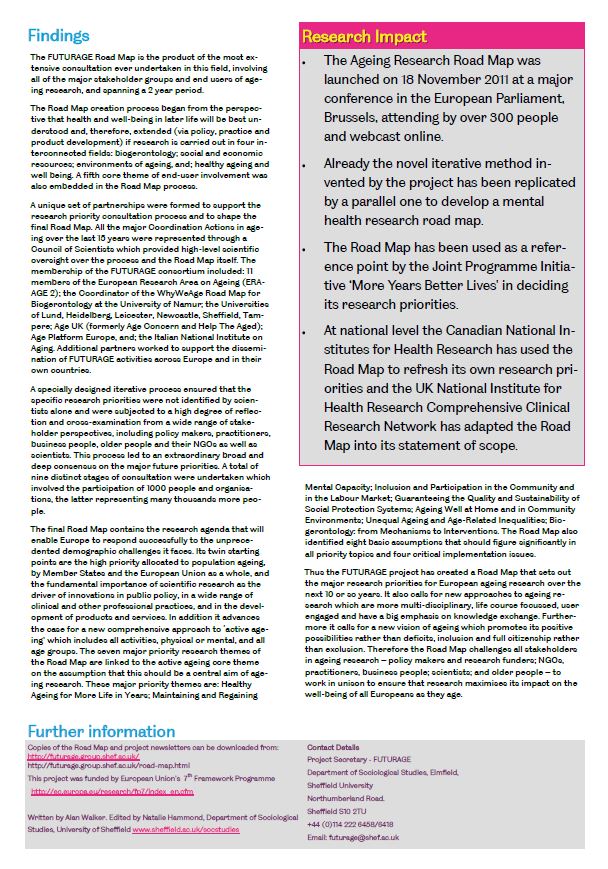 User involvement as a core element of the FUTURAGE project

Although there is an increased awareness of the importance of the engagement of users in research, the extent to which user involvement has been formalized within European programmes varies greatly. The need for a society-driven research has been acknowledged by the FUTURAGE project as an added value both for users and researchers. Meanwhile, such a coordinating activity should strengthen the effectiveness of research expenditure and the relationship between research and policy and practice.

In the view of integrating user’s perspectives in the production of the Road Map, FUTURAGE has appointed two partners, AGE Platform Europe and Help the Aged, to organize two workshops on users’ involvement, where relevant stakeholders, including people representing end user’s interests are invited to participate:

During these two workshops, user engagement was discussed with reference to real research priorities as they are defined by the four scientific work streams of the project. However, the objective is that the results of the workshops will not only feed into the Road Map process but will also contribute to the development of a methodology of user participation for future research.

Overview of the User Involvement Workshops

After significant progress made during the 1st FUTURAGE workshop on user involvement, the second workshop took place in Barcelona on the 13th and 14th July, hosted by hosted by the Universidad Autonoma de Barcelona. This meeting built on the themes defined by the 1st workshop and concentrated on the priorities of users and on the finer details of a methodology for user involvement. You may find the agenda for this workshop here.

The report of this workshop will be soon available.

The 1st workshop on user involvement in the framework of the FUTURAGE project was organized by AGE Platform Europe with the support of AGE UK, with the objectives of:

The main part of this workshop was held in working groups, focusing on the following themes:

The participation of some of the most relevant stakeholders in the field of research, policy, industry, academia and representatives from older people organizations, has assured a high quality debate, generating recommendations for the second round of workshops within the FUTURAGE project, in the view of strengthening users’ involvement in research.

To read the final report, including the main outcomes of this workshop, please click here.