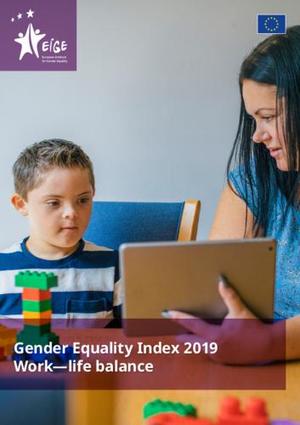 Progress in gender equality in European Union since 2005:

The European Union has been moving towards gender equality at a snail’s pace. With a Gender Equality Index score of 67.4 out of 100, the EU still has a lot of room for improvement. Since 2005, the EU’s score has increased by only 5.4 points (+ 1.2 points since 2015).

The EU is closest to gender equality in the domains of health (88.1 points) and money (80.4 points). Gender inequalities are most worrying in the domain of power (51.9 points). Nevertheless, the score in this domain has improved the most since 2005 (+ 13 points), due to progress in nearly every Member State.

Although the EU has progressed towards gender equality, developments are uneven between Member States. Sweden (83.6 points) and Denmark (77.5 points) are consistently the most gender-equal societies. Greece (51.2 points) and Hungary (51.9 points) have the longest way to go. Italy and Cyprus have improved the most (+ 13.8 points and + 10.4 points), while Lithuania is the only country not to have made any progress in gender equality since 2005. In some domains, progress has slowed, stalled or even regressed. We are still far from the finish line.

Read our article on the Gender Equality Index 2019