After 70 years of human rights, what’s next? 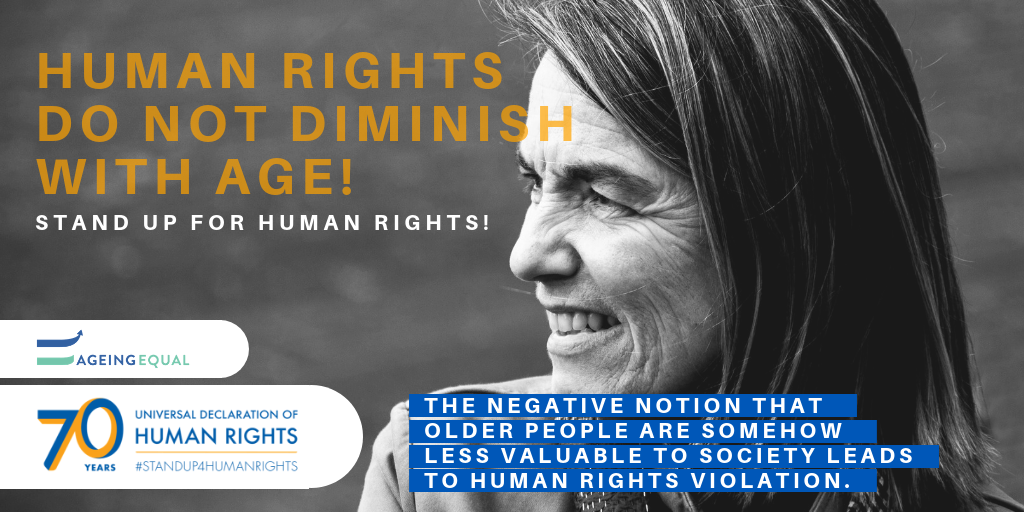 The image of a “silver tsunami” sometimes used to describe Europe’s ageing demographics was certainly not framing the debate in a positive way. The image yet has the advantage to grasp the power of communities when those reach a critical mass. What would happen if these silver hairs were actually gathering to reframe the public discourse about ageing and older people into something positive?

2018 was a special year! Back in 2017 already, Professor Israel Doron, Head of the Department of Gerontology at University of Haifa, Israel, had woke the audience up at AGE Annual Conference, calling for the rise of “ageivists” to defend our human rights in older age. At that time, we were all far from imagining that a year later, we would gather supporters on all continents to call for the eradication of ageism and rally the #AgeingEqual campaign motto: “Human rights do not diminish with age!”

The “glue effect” of campaigning

Campaigning had this common yet ever surprising effect similar to all collective action movements: it impacted at least as much those who carried the message than those who were supposed to receive it.

As all forms of discrimination that used to be socially accepted, ageism is a fight that is not easy to get started. It requires for campaigners to be ready to be largely contradicted, ignored, left out… in other words, it supposes activists of this new cause to be ready to fail. This is not specific to the fight against ageism. Women with sexism, people of colour with racism, gay and lesbian people with homophobia, to name just a few, went through similar oppositions in the early days of their movements.

And this is where collective action is powerful: by putting ourselves in motion, we share the responsibility of this potential failure. We share our stories and realise we can actually relate to one another’s experiences. We bring our voices together and suddenly we realise that we speak louder. Campaigning has this magic “glue effect” that lightens up the burden of the excluded and discriminated, highlights common values between individuals, and invigorates sleeping communities!

Over ten intense weeks, we talked about ageism in a new way: more appealing, more provocative, more accessible too. On 10th December 2018, the #AgeingEqual campaign reached its climax by fading into the celebrations of the 70th anniversary of the Universal Declaration of Human Rights. It closed in an invitation to keep the ball rolling so we eventually enjoy human rights at any age:

By inviting specific groups – women, migrants, people of colours, LGBTI, people with disabilities, etc. – to reflect on how ageism might affect them in older age, we went beyond the usual suspects. We deepened our understanding of the various realities faced by these groups as they age. Each of these realities are specific to a group, resulting from the intersection of ageism with one or several other discriminations.

But beyond these specificities though, the #AgeingEqual campaign federated our efforts. We shared good practices, tools and tips to address ageism and we realise of what we were capable to achieve together. When ageism is picturing older persons as vulnerable and frail second-class citizens, rising up to self-defend our rights is probably the best attitude to adopt to propose an alternative narrative about ageing and older age!

The #AgeingEqual campaign was a first at European level. It gave a kick to the fight against ageism and we liked it so much that, despite the end of year tiredness, we now feel a furious desire to reconnect with all the beautiful people met along the way to continue campaigning for a society inclusive and respectful of all ages!

Next year, it will be 50 years that Robert Butler will have first coined the term “ageism” as a combo of stereotypes, prejudices and discriminatory practices towards older people. Next year, we will make sure “ageism” as a word exists in all European languages so that we can give it visibility and properly take action against it.

Next year, we will echo the voices of this woken up community of anti-ageism activists at the United Nations level again and call for a new UN convention for the protection of human rights in older age on the occasion of the 10th Open-Ended Working Group on Ageing.

Next year, we will lobby the new European Parliament and European Commission to make sure they fulfil the pledge to leave no one behind and foster initiatives that will protect the rights of Europeans at any age.

But for now... we will take a little rest. We wish you a beautiful festive season and hope to see you rested and even more determined in early January! 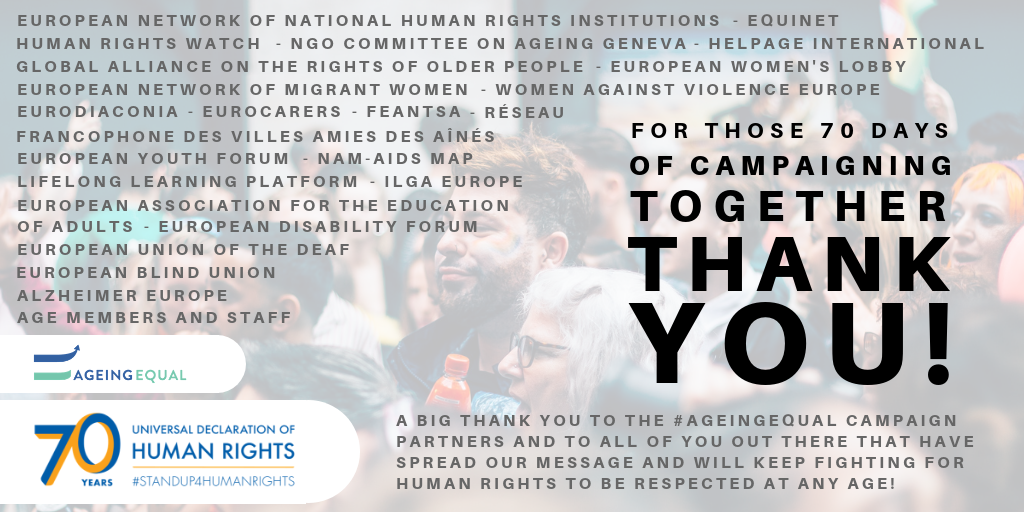