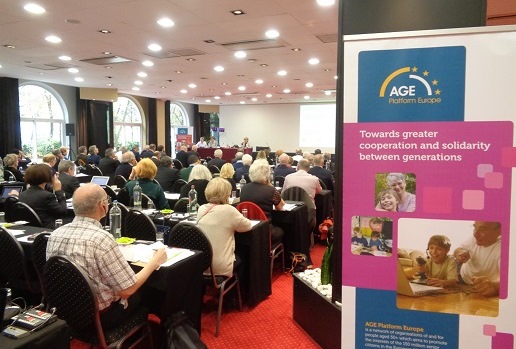 The right to be respected and treated with dignity and to participate fully in society can be a real challenge for older people, in particular in these times of persisting economic and social crisis in Europe.  In that context, AGE Platform Europe held on 16-17-18 November 2016 its General Assembly and the fourth Annual Conference, gathering its member organisations together with policy makers, external experts, researches and older self-advocates. They discussed challenges for policies on ageing at local, national and European levels, as well as how best combat age discrimination, while strengthening both economic and social rights of older people in view of empowering them as equal citizens. Building on the recommendations of the Final Declaration adopted by AGE General Assembly, the conference addressed the on-going review Madrid International Plan of Action for Ageing (MIPAA), focusing on opportunities for synergies and mutual strengthening between the implementation of the MIPAA and other policy processes at local, national and European levels.

AGE members are increasingly using a human rights narrative in their advocacy at national and European levels. AGE Platform is also actively involved in the international debate on older person’s rights, including the discussion with the United Nations (UN) around a new international convention on the rights of older people.

The General Assembly opened on 16 November with a thematic session dedicated to human rights in old age gathering about hundred representatives of non-governmental organizations (NGOs).  The session provided training with an aim to increase the understanding about why human rights matter and how older people and their organisations can use existing human rights mechanisms to drive policy change. A detailed report from AGE thematic session on human rights can be read here.

On 17 November, AGE General Assembly adopted the following two policy documents to guide AGE work for the year to come:

On  18 November, following the General Assembly, AGE fourth annual conference gathered decision makers, experts, researches and older self-advocates to discuss how best address age discrimination, while strengthening both economic and social rights of older people in view of empowering them as equal citizens. 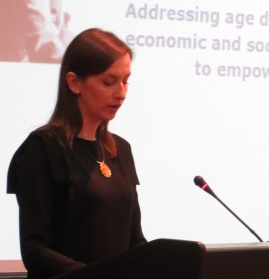 Opening the conference, Sylwia Spurek, Vice Commissioner for Human Rights in Poland insisted on the invisibility of barriers older people face in their daily lives and pledged in favour of a binding legal instrument to enhance older people’s rights, such as an international convention. Ms Spurek recommended actions to enhance understanding of age discrimination among policy makers, especially of indirect discrimination, and insisted on the need to move from soft law measures such as the MIPAA to legally binding ones with a follow-up on local level. She furthermore insisted on the need to record the violations of the rights of older people to make the case for the necessity of a convention.

Following the opening speech, a series of three panels addressed key topics in relation to the further implementation of the Madrid International Plan of Action on Ageing.

The first panel was dedicated to social and technological innovations and the exchange of experience in that field, in particular on transferability of practices from across the EU to the national context. Yves Dario from the King Baudouin Foundation in Belgium shared experience from two initiatives awarded by an EU contest promoting active and healthy ageing, on the direct involvement of older people in the creation, development and management of projects/initiatives and on the barriers to access technology in old age.

Juliane Jarke from the University of Bremen pledged for a greater involvement of older people in the design and development of digital public services – which is indispensable in order to address the challenges that the growing use of digital technologies raise for older people. She insisted on the principle of co-creation as a tool to empower and involve older citizens – together with decision makers, service providers and designers – to take part in the conception of built, mobile and virtual infrastructure. 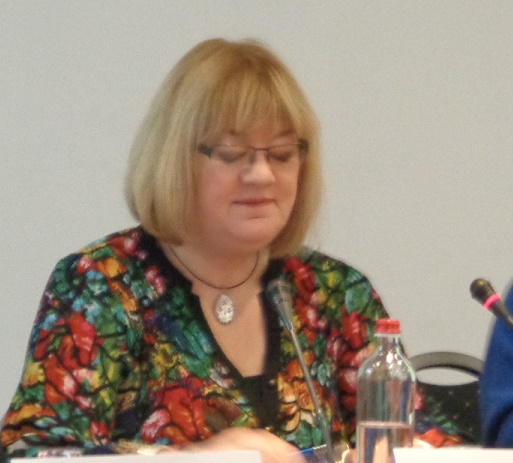 discrimination in employment and in the workplace. Brenda O'Brien from the European Agency for Safety and Health at Work (EU-OSHA) presented key outcomes from a pan-European campaign “Healthy Workplaces for All Ages”, namely:

Another aspect put forward in debate was the role of working time reduction and of partial retirement schemes to enable people to work longer in meeting older workers’ needs. It is one of the findings coming out of the recent study on ‘Work preferences after 50 and flexible retirement schemes’ carried out by the European Foundation for the Improvement of Living and Working Conditions (Eurofound). ‘Older people should be enabled but also motivated to work longer’, pointed out Hans Dubois from Eurofound.

Feedback for national and regional practice was furthermore provided by Anne Himpens, representing the Flemish Regional Department for Work and Social Economy, with the example of a programme implemented in Belgium and Flanders and aiming to support health management and skill upgrading in the work place, namely through financial incentives and exchange of experience.

The third panel addressed various solutions to promote dignity and independent living in old age. An example of the training of care staff and older volunteers to support active and healthy ageing and develop older people’s potential was presented by Laura Christ on behalf of the Erasmus Project Active 80+. A fragment from a movie 'Simple Desire’ was projected to illustrate various dimensions of participation: engagement, encounter, trust, listening, sharing, learning and longing to be seen, to be of meaning, to contribute.

The issue of one’s well-being and dignity in old age was also highlighted in relation to dental care and incontinence, in particular the poor understanding of both phenomena and challenges they raise for national health care systems in terms of individual needs and costs. Gerry McKenna from Queens University in Belfast Dental insisted on how dental problems may compromise individual health and well-being, whilst the lack of adequate care is the cause of other health issues in old age.

The highlight of the conference was the testimony of Edwina White who as a self-advocate shared her experience about the challenges incontinence problems raise for you to live an active independent and dignified life at home and in the community. Considering the invisibility and poor understanding of these challenges, Ms White called for further awareness raising not only among policy makers, health or care professionals, but also among persons with similar problems. To complete this personal testimony, Paul van Houten, expert in continence care from Zonnehuisgroep Amstelland, shared key findings from the research on incontinence problems versus independent and dignified life.  To address challenges successfully, Mr van Houten called on to adapt existing infrastructures and to change people’s and decision makers’ attitude. 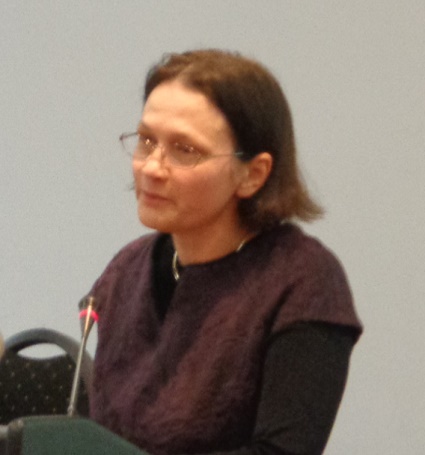 Concluding the morning session, Marie-Hélène Boulanger, Acting Director for Equality and Union citizenship for the European Commission (DG Justice) gave an overview of the initiatives undertaken by the Commission to combat age discrimination and improve older people’s access to health care and employment. With regard to rights, although the European Union is actively promoting a better use of existing instruments – including the MIPAA and UN Convention on the Rights of People with Disabilities – it remains for the time being not convinced of the necessity of a new international convention specifically on older people’s rights. The Commission remains however open to further discussions, including with the UN Independent Expert on older persons’ rights, i.e. the extension of whose current mandate the Commission is supporting.

In her conclusions, Ms Boulanger announced EU specific actions to combat violence against women including in old age, as well as the planned directive of unfair commercial practices to protect the rights of vulnerable consumers.

In the afternoon, a session with policy makers was dedicated to the current mid-term review of the MIPAA, in particular the synergies between policy making at national and EU levels. The session included a presentation on implications for the national policies on active ageing by Olga Pietruchova representing the Ministry of Labour, Social Affairs and the Family of the Slovak Republic.  Ms Pietruchova also presented findings from the initiatives undertaken by the Slovak Government in the fields of technological innovations on ageing and longer working life.

This was followed by an update on the current MIPAA mid-term review. Vitalija Gaucaite from the United Nations Economic Commission for Europe (UNECE) committed in particular to strengthening the involvement of older people and their organisations in the follow-up to the implementation of the Madrid Plan. The MIPAA, reminded Mr Gaucaite, is ‘a comprehensive plan making all relevant ministries and people work together’. Participants also applauded the UNECE engagement to pursue and fully seize MIPAA’s potential to trigger policy change and ultimately to improve the situation of older people at the grass roots level. 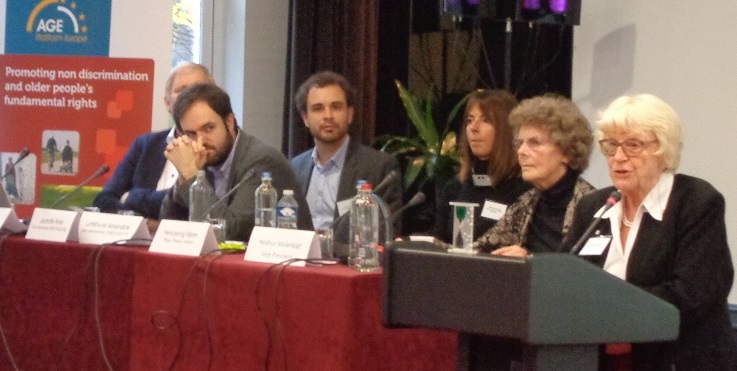 AGE’s three-day event provided, this year again, an opportunity for dynamic and rich exchange among actors from different areas and across local, regional, national, European and global levels to reflect together on solutions to manage our common demographic challenge. The diversity of the topics discussed and of the number of initiatives presented highlighted the complexity and multi-dimensional aspect of ageing and rights related issues, but also the dynamism, and the strong engagement and cooperation it generates.

Existing practices, partnerships and exchanges of experience across the EU are essential not only to increase understanding on older people’s needs; they also combine forces to address one of the major societal challenges, ageing population, and make it an opportunity for further social and economic development, without increasing inequalities and discrimination.  AGE General Assembly and 4th Annual Conference proved that common efforts can bring tangible changes in individual lives of older people.