Identifying the barriers that prevent older persons from fully enjoying their human rights and how to overcome them was the objective of a seminar organised jointly by AGE and the United Nations Human Rights Office (OHCHR) for the European region. Organised on 12 and 13 April 2018 at AGE’s premises in Brussel, the seminar brought together a group of 35 AGE members, human rights practitioners and experts from the United Nations, researchers and advocates. 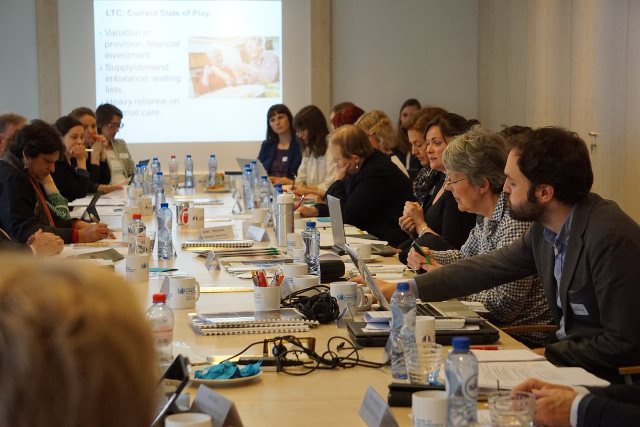 The day-and-a-half meeting was organised in view of discussing the topics that will be addressed at the 9th session of the Open-Ended Working Group on ageing (OEWG) in New York from 23 to 26 July 2018, namely:

The OEWG, in place since 2010, is analysing the level of enjoyment of human rights by older persons and the relevance of a new international instrument to close gaps in protection. In order to address this year’s focus topics and submit our own written contributions to the Chair of the OEWG, we have been organising several consultations with AGE members and Task Forces; among them, this joint seminar with the United Nations Human Rights Office has been a key step forward.

Persisting obstacles in enjoying autonomous and independent lives, and in accessing quality care and support

The group identified serious gaps in the protection of older person’s ability to live autonomously and independently. Structural ageism acts as a powerful barrier, with older persons finding themselves in situations where their autonomy might be at stake due to age-based restrictions and negative attitudes. There was an overall agreement that older persons remain invisible in the human rights system, and that action is needed to ensure equal enjoyment of autonomy and independence regardless of age.

Participants highlighted the importance of shifting away from paternalistic visions of older persons, which in practice limit older persons’ ability to take autonomous decisions, and supporting self-determination and decision-making while fully respecting the rights, wills and preferences of the person.

Obstacles also persist regarding older persons’ access to long-term and palliative care. Integrating the dimension of ‘support’ in discussions about care was seen as a necessary step in order to adopt a broader approach that includes not only health and social care but also full participation to society.

Discussions also covered the key role of informal carers, including relatives. Whereas Informal carers are essential players who need to be supported, discussions helped understand that the States should be the sole bearers of legal duties and that a new human rights instrument should create upon them the obligation to provide quality care and support to the rights’ holders, who should be the older persons themselves.

Ensuring access to palliative care was also identified as a key element of a quality person-centered care and support continuum that all persons in need should have access to. This involves challenging misconceptions of palliative care as associated to imminent death, and acknowledging that it can benefit anyone with a life-threatening condition, regardless of age, illness and life expectancy.

Identifying elements of rights to equality and non-discrimination and to freedom from violence, abuse and neglect

The group discussed the scope of the right to equality and non-discrimination, exploring the need for an understanding of ‘old age’ beyond the chronological dimension. The Convention on the Rights of Persons with Disabilities (CRPD) and the Council of Europe Recommendation (2014)2 on the rights of older persons, which focus on societal barriers in combination with old age, were mentioned as a possible inspiration. 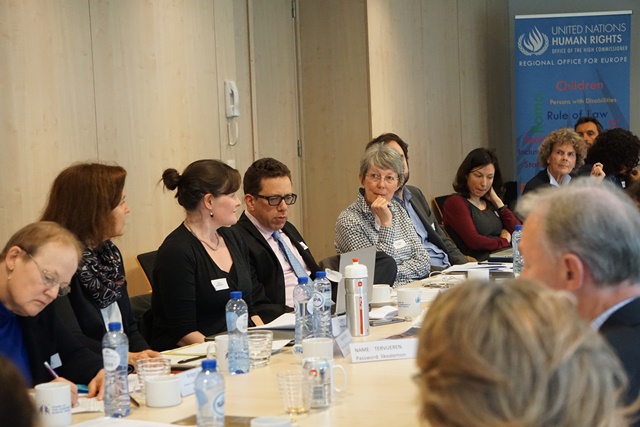 Among the obligations of States, the need to abolish laws, policies and practices that are discriminatory on the basis of age as well as addressing any forms of multiple discrimination were mentioned. Importantly, the group discussed differential treatment on the basis of age, which can be justified if used to promote access to rights and not to undermine them.

Regarding violence, abuse and neglect of older persons, the group agreed on the importance of defining thoroughly the nuances of each of those violations of human dignity; definitions should be wide enough as to cover all possible situations, while not undermining the importance of other forms of violence, such as gender-based.

Further discussions focused on defining obligations of States, with a general agreement that the obligation to prevent violence and reach out and support victims, survivors and persons at risk should apply to both public and private settings . Preventative actions should include training of all professionals, not only in the care sector, but in all areas of society. The protection of victims and survivors should be available regardless of the type or intensity of the act of violence, abuse or neglect, and should cover also older persons with disabilities or cognitive limitations.

Some of the main points discussed during this very rich seminar were reflected in a document shared with the Open-Ended Working Group, which is available here. This provides important elements for AGE’s work in preparation of our participation to the 9th session of the OEWG in July.

Next steps include AGE’s Annual Conference, next 6 June, which will involve a wide discussion with AGE members on these topics.

You can consult AGE’s own submissions to the OEWG:

In addition, AGE collaborated with an informal group of experts to answer the call of the Chair of the OEWG, based on a legal analysis, for each of the four themes: violence abuse and neglect, equality and non-discrimination, autonomy and independence and long-term and palliative care.

Given the very positive cooperation with UN’s Human Rights Office, we are planning new joint initiatives in the near future, including a training session with AGE’s members in the first half of 2019. Stay tuned!

View the agenda of the seminar here