European citizens have elected their new Parliament. What comes next for older persons?

photo by Elliott Stallion on Unsplash

The campaign’s dust of the European election is just settling and voters have decided who will represent them for the five years to come in the Strasbourg and Brussels hemicycles. This time, more than 50% of EU citizens eligible to vote took part in the elections, the highest turnout in 20 years and the first time since the first direct elections in 1979 that turnout has increased. The new European Parliament is more diverse than before, with  shifts away from traditional parties, the emergence of smaller parties and, as a result of UK’s participation in the elections, a consolidation of a strongly euro-sceptic wing. This is a time where older persons’ organisations should reach out to their new representatives and ensure that decisions ‘about us’ are not taken ‘without us’.

More political diversity as a challenge... and a chance

Find out the new composition of the European Parliament here.

A lot has been said about the new composition of the European Parliament. These elections have confirmed (in France) or created (in the United Kingdom) the rejection of dominant party systems, right-wing populism has been confirmed as a stable political group, albeit experiencing both gains and losses and a spread over at least three political groups. The former ‘smaller’ parties, liberals and Greens, have grown in size and surpassed traditional parties in some member states. In the new European Parliament, there is no clear majority as neither of the big parties can mobilise a majority without at least two other parties. This political diversity is a challenge: any EU initiatives will need the votes of at least three political groups (instead of the two big ones in the past). It will definitely be more difficult to build coalitions for important EU projects across party lines. But here comes also a chance, that those projects which will succeed will build on larger compromises. The grown smaller parties (liberals and Greens) will want to imprint their mark on new initiatives. This is a chance for more consensual projects! 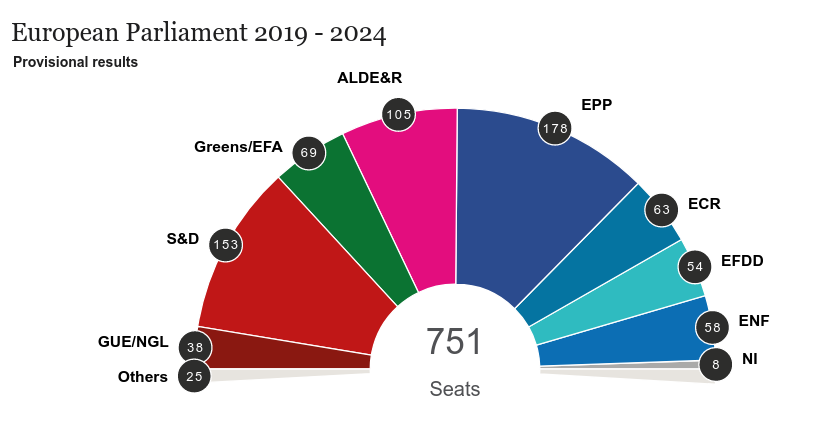 The elections were an occasion to reflect on common stereotypes regarding older peoples’ political behaviour. During a debate with a students’ organisation, AGE highlighted that older persons usually show a higher turnout, make their choice more often well before the elections and stick more often with their political choices over time. Therefore, in an age of political upheaval, they are a factor of stability. Results from some EU countries actually show that it is rather younger people (predominantly male) embracing new populist parties. Nevertheless, political ageism exist in and against both younger and older people, therefore more direct opportunities should be created to discuss policies across generations.

Calling for a constructive atmosphere

Older persons are the fastest-growing age group in Europe, with the share of persons over 65 growing from currently one in five to one in three in 2080. The number of persons over 80 will more than double over the same period. These figures alone show that all policies should be made bearing in mind demographic change and its profound impacts, therefore both younger and older persons should sit at the table during these next five years to shape our future. Building consensual projects starts with the constrictive participation of civil society groups in political debates.

To sit at that table, AGE members should take action! New MEPs need to learn where the interests of their constituents are. Therefore, AGE addresses a call to all its members to continue to reach out to their relected and newly elected MEPs (read our article here). On European level, AGE will also contact MEPs to build a new coalition for active and healthy ageing and solidarity between generations.

The next steps are crucial for the direction of the coming years: the new European Commission, including its President, needs to be approved by the European Parliament after nomination by the Council. A work programme will be drafted and the candidates will be questioned in plenary. AGE will seek to influence this process through suggestions on questions MEPs could ask candidate Commissioners to ensure older persons’ concerns will be raised when relevant during the hearings.