Final stretch before the polls: Where are we with the European elections?

Ageist attitudes hit the European elections debates in several EU member states where national leaders and MEP candidates themselves mock their adversaries as ‘dinosaurs’, or have diplomatically called for a ‘generational change’ in Brussels. At AGE, we believe it is rather a new intergenerational solidarity contract that we must work on. Two weeks ahead of the European Parliament elections: where are we? what can we expect? what should we do?

Whether the next European Parliament will shrink in size because of the departure of the United Kingdom remains to be seen. For now, the British voters will be invited to hit the polls next 23rd May Whether elected British MEPs will be able to take their seats will be another story.

We, as Europeans, face many common national challenges as well as translational issues (climate change, international migration, cybersecurity, etc.). Yet the mistrust in politics developed with the advent of fake news as well as the rise of Eurosceptic political forces have demonstrated that the EU is not an irrevocable project. 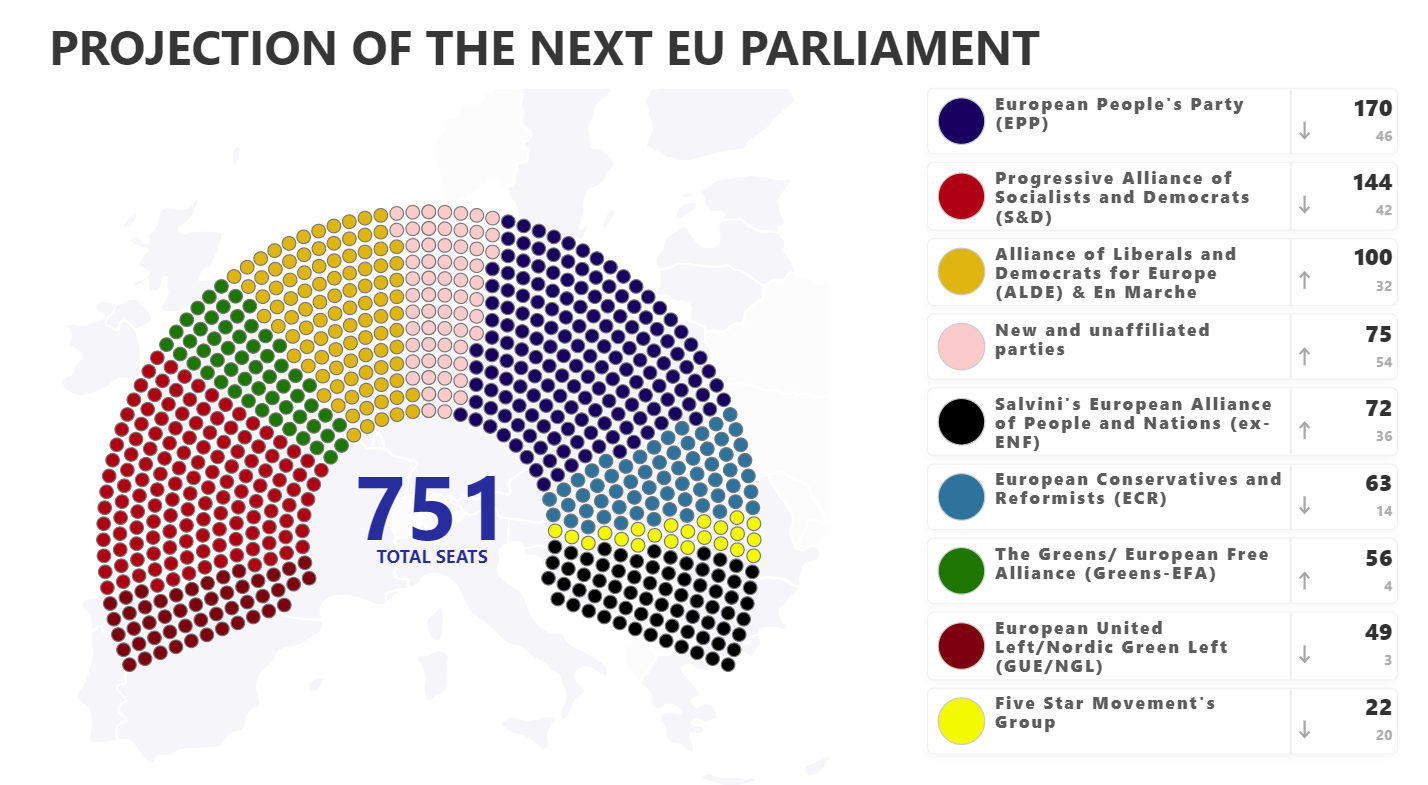 With low turnout projections, the most constructive forces of the European Parliament are at threat. The latest polls anticipate an important drop in number of seats for the two major political forces: the European People’s Party (-46 seats) and the Socialists and Democrats (-42).

The big winners of these next elections are likely to be the newcomers with unaffiliated parties expected to get about 10% of the European Parliament’s seats (+54). The Alliance of Liberals and Democrats for Europe, teaming up with the party En Marche of the French president Macron should also see its delegation increase (+32).

We can no longer afford to take democracy, the respect of law or the protection of minorities for granted. It needs actions, it needs voting. Europeans of all ages need to choose the future we all want.

What can we do beyond voting?

National governments will have a key role to play after the European elections. It will be the responsibility of the European Council to nominate the next European Commission president to be elected by the European Parliament. Heads of States will then be deciding in first place who will lead the EU executive body for the next five years.

A second Presidential Debate will be broadcast live from the European Parliament in Brussels on 15 May 2019 at 21:00 CET. You can already send your questions to the European Broadcasting Union in charge of the debate now by using #TellEurope

How European parties stand with regard to ageing?

Despite that older age groups form a growing part of our societies, not all European parties have openly addressed in their election manifestos the demographic ageing, its challenges and opportunities.

The Alliance of Conservatives and Reformists in Europe (ACRE) overlooked older Europeans with no mention in their lead candidate’s programme to proposals on ageing or intergenerational policies.

The Alliance of Liberals and Democrats for Europe (ALDE), while recognising the rapid ageing of our populations, stresses the importance of “bridging the generational digital skills gap” to meet the needs of the labour market of the 21st century. The European Democratic Party, which sits in the same political group than ALDE in the European Parliament, has more references to older people, highlighting the need to fight against discrimination and of creating tools for social convergence, European standards for minimum pensions and minimum income schemes, work-life balance and care for older people and inclusion of people over 50 in labour and housing markets.

The European Greens (EGP) have made a strong call for “social and generational justice and inclusive democracy”. Stressing the importance to shape a European economy that serves both current and future generations, the Greens are adopting an intergenerational approach that is far from diluting the specificities coming along with later life. Their section on ‘Elderly’ highlights some important challenges faced by older people like post-retirement poverty, difficulties to access educational opportunities, prejudice and discrimination on the ground of age. Mainly focused on the ageing workers, the Greens call for an effective right to lifelong learning and flexible retirement.

The European Left (EL) manifesto reminds the attachment of the left-wing political forces of Europe to social justice, but it remains silent on how this social justice would translate in the context of longer lives for most Europeans and the new generational mix.

The European People’s Party (EPP) manifesto approached the European population ageing through the lens of the challenge it poses to our social security systems. The EPP commitments yet also flag the importance of life-long learning training systems to provide all Europeans with equal learning opportunities. In addition, the EPP underlines that the inclusiveness of our societies implies that we address the “poverty among the elderly” and develop “effective education and health systems, together with the provision of care for the elderly and people with disabilities”.

The Party of European Socialists (PES), finally, calls for a Europe of welfare with social safety nets, and quality public services crucial to “protecting those in need, including elderly people”. They reaffirm people’s universal rights to quality healthcare, education and decent pensions that are key for people of all ages to work and to live in dignity. In their ‘Youth Plan’, they touch upon intergenerational solidarity as the founding principle get away from the current fear and insecurity of later life.

It is our collective responsability to choose our future!

Over these last campaigning weeks, talking to candidates and engaging in the electoral debate will be the best way to ensure citizens contribute to shape the European Union of tomorrow. Together with social and environmental NGOs member of the Social Platform, AGE holds high the values that unite us (see our video below). With these elections, we have the ambition to shape a European Union that truly leaves no one behind!

Keep on asking, keep on being vocal. It is an individual and collective responsibility to decide what our common future will look like and how the aspirations of all various population and age groups will be addressed by the new European decision makers.

It is time to choose our future, together!