International Older Persons’ Day: Valuing and enabling contributions through the fight against ageism and the protection of human rights in old age

The 2017 International Day of Older Persons looked at pathways that enable full and effective participation in old age within families, communities and societies at large. As we stated in the press release we issued to mark the Day, valuing and supporting the participation of older people in society are increasingly acknowledged as prerequisites to ensure the well-being of older persons and help our societies meet the challenge of changing demographics combined with the pressure on public budgets while respecting older persons’ human rights.

Using the momentum of both the International Day of Older Persons and the UNECE Ministerial Conference on Ageing held on 21-22 September 2017 in Lisbon, AGE recalled that the protection of older persons’ human rights and combatting ageism can strengthen the full spectrum of older persons’ human rights and eventually enhance their participation in social, cultural, economic, civic and political life. 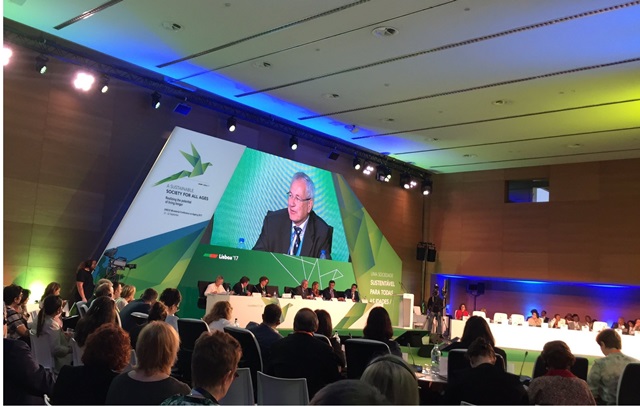 Organised by the UN Economic Commission for Europe, the conference gathered representatives of national governments, academia and civil society and focused on the theme of “A Sustainable Society for All Ages: Realizing the potential of living longer”. The event completed the third review and appraisal cycle (2012-2017) of the Madrid International Plan of Action on Ageing and its Regional Implementation Strategy (MIPAA/RIS). It ends with the adoption of the 2017 Lisbon Ministerial Declaration, which outlines the commitments of UNECE countries to reach three priority policy goals by 2022:

The active involvement of a large delegation of our members - both in the UNECE NGO Forum on Ageing that took place on the day before the Ministerial conference (see also AGE press release) and at the Ministerial conference itself - helped to get governments’ attention to the challenges faced by older persons to enjoy their human rights in old age. Even though some existing national and EU legislations address older people’s rights, for example to live a life of dignity and independence, overall they are insufficient to combat ageist attitudes toward older people. When addressing the ministries present in Lisbon AGE President, Ebbe Johansen, called on them to use the complementarity of the Madrid International Plan for Action on Aging (MIPAA) and other relevant policy frameworks to uphold older people’s human rights.

A report of the Ministerial Conference on Ageing is available on UNECE website.
Further reports are also available in German on the website of AGE German organisation BAGSO and in Spanish from AGE Spanish oganisation CEOMA

Adopted in 2002, the MIPAA is the first institutional attempt to link ageing policy to other related social and economic developments at global level. Conceived as an intergovernmental process, the MIPAA is also supposed to provide opportunities for involvement of civil society. AGE Platform Europe has been actively following the MIPAA process from its beginning, promoting bottom-up participatory approaches to empower older persons and involve them in the development of policy-making at all governance levels. We have been encouraging our member organisations to engage with national governments on the implementation of the MIPAA. End of 2016, building on our members’ findings we issued a comprehensive assessment of the MIPAA’s implementation across the EU over the period 2012-2017. We looked for evidence of the MIPAA’s impact on social realities and the enjoyment of human rights by older persons in the definition, implementation and monitoring of policies that concern them. In sum, we are concerned with the MIPAA’s low-profile within most national policy agendas, its disconnection from other relevant policy frameworks and the overall lack of involvement of older persons.  Our conclusions and recommendations informed AGE‘s most recent participation in the Ministerial Conference on Ageing held on 21-22 September 2017 in Lisbon.

The MIPAA – which has not been designed as a human rights instrument – has a great potential of upholding human rights of older persons. Our contributions in Lisbon highlighted the need to reorient MIPPA objectives beyond 2017 in order to effectively mainstream older people’s civil, political, social, economic and cultural rights into overall policy making. Regional strategies which will underpin the implementation of the MIPAA in the five coming years should also be used to support these rights. The renewal of our governments’ commitments should build on the on-going developments in the UN Open Ended Working Group on ageing (OEWG) on how to improve the protection of older people’s rights on the ground.  While the OEWG has an exclusive mandate to promote the respect of older persons’ rights, the MIPAA provides a comprehensive policy framework on ageing to put these rights in practice.

The UNECE Ministerial Conference was a timely occasion for AGE members to reiterate their support to the UN Independent Expert on the enjoyment of their human rights by older persons, Rosa Kornfeld-Matte, who recently called for a new binding instrument, such as an international convention, to

combat all barriers faced by older people in respect of their human rights. On 20 September, on the eve of the conference, the NGO forum gathered more than 100 participants, half of whom were AGE members. Together they were able to influence largely the NGO Forum final declaration, namely with AGE call for a international convention. Our call also echoed all along the ministerial conference and was backed by the Secretary General of the European Youth Forum (EYF) who spoke together with AGE President in the conference’s panel on the theme of “Recognizing the Potential of Older Persons: Intergenerational perspective”. Thanking the EYF for their support, AGE President insisted in his final remarks on the fact that age-based discrimination affects all ages and that consequently the young and the old need to join forces to promote an intergenerational vision of ageing.

AGE was furthermore invited to speak at two side events on ‘Breakfast talk on the Global Campaign to Combat Ageism’ and on ‘Active Ageing Index: ways to realize the potential of living longer’.

AGE will continue to monitor the implementation of the new MIPAA commitments made by national governments in the Ministerial Final Declaration adopted in Lisbon. The MIPAA review and appraisal taking place every five years, we have decided to facilitate our members’ task of preparing the next assessment in 2022.  An internal AGE monitoring tool will be launched beginning of 2018 to analyse the impact that the MIPAA has at grass root levels and to report annually on the situation of older persons across the EU.

UNECE synthesis report on the implementation of the MIPAA