Campaigning is an ever challenging activity. It implies engaging with those who are not yet aware, are not convinced or do not feel concerned. It means going beyond the circles of friends, partners and supporters to raise in the wider public sphere a debate that will hopefully bring some change on what used to be an invisible issue. With the #AgeingEqual campaign, AGE is determined to further shed light on ageism.
After a month of campaigning...

We deepen our understanding of ageism

Ageism is so ingrained in our mindsets that it requires constant efforts to question what we think and how we feel about ageing. Similar to other “–isms” like sexism or racism, ageism goes from the most insignificant form of stereotyping sometimes even with good intents to the most damaging and harmful discriminations resulting in mistreatment, abuse, and premature death of older people.

The #AgeingEqual campaign aims to cover the whole continuum of ageism. Since the campaign first week, we collected evidence of the pervasiveness of ageism in everyday language, in government laws, in health policies, in statistics... even in the way we report on human rights! Findings from research have been very helpful in our effort to demonstrate and illustrate the disastrous effects of structural ageism.

Beyond structural ageism, there are people who are the victims of internalised stereotypes and discriminatory laws, policies, and behaviours. By adopting a thematic approach, the #AgeingEqual campaign allowed to consider ageism from different perspectives and thus explore how ageism interacts with other forms of discriminations, putting certain groups at higher risks of exclusion and vulnerability as they age. This is the case of women and transgender people, people in situation of poverty, older migrants or older people left behind by families who were forced to leave them behind.

> Listen to the one-hour IFA/WHO webinar on ageism

We see a community of anti-ageism activists growing

From the very start on 1st October, International Day of Older Persons, the #AgeingEqual campaign was put in the limelight with the United Nations Independent Expert on the Rights of Older Persons, the U.N. Office of the High Commissioner for Human Rights, the World Health Organisation, several Members of the European Parliament as well as many civil society organisations – including Human Rights Watch and HelpAge International, academics and activists showing support to the campaign.

Challenging people’s misconceptions of ageing and older age requires much more than institutions to take a stand. It needs to reach a critical mass of activists committed to bringing our anti-ageism messages to the grassroots level so that every region, every neighbourhood, every household, every 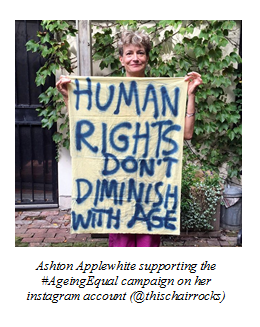 individual hear about ageism and its negative impacts on individuals and society. And there, AGE members and partners got off with a pretty good start: we heard about the #AgeingEqual campaign in Albania, in Finland, in France, in Germany, in Greece, in Italy, in Portugal, in Spain, in Sweden, in the UK as well as beyond the European borders.

Thanks to the support of amazing older human rights champions and ambassadors – first and foremost Ashton Applewhite, famous in the anti-ageism community for her page on the blogging and social media platform Tumblr « Yo, Is This Ageist? » – the campaign is now going full speed and being rallied by new supporters and allies.

We sustain the efforts until we live in a society free from ageism!

The campaign is already bearing its first fruits: after shedding light again on discriminatory age limits to refund for first-line psychological care in Belgium, the Belgian Federal Council of Older People met the advisor of Maggie De Block, Belgian Minister for Health. On this occasion, the Council urged for an extension of the refund to people aged 65+. The Minister will publish her policy paper for next year within the next few days.

Supportive feedback received from friends should not blind us to what still lies ahead of us. The task is enormous: ageism remains the form of discrimination that is – wrongly! – found more acceptable than others, whether it affects younger or older people. The second half of the campaign will challenge our ageist stereotypes and bring to the forefront the multiple discrimination experienced by some vulnerable groups by focusing in the coming weeks on sexuality, race and ethnicity, elder abuse, participation and disability.

AGE will do its utmost to keep the momentum going as we approach the 70th anniversary of the Universal Declaration of Human Rights to be celebrated on 10 December. AGE is currently planning the celebration of this anniversary hand-in-hand with the Youth European Forum in early December; stay tuned because we will need everyone on board!

Together We Can Make A Difference!

Add your voice to the #AgeingEqual campaign on social media

Share your experience of ageism by submitting a testimony online

#AgeingEqual is a 70-day campaign initiated by AGE Platform Europe to raise consciousness of the disastrous effects of ageism on older people. To learn more about the campaign, visit the dedicated page on AGE website or read the campaign weekly highlights