photo by Claudio Schwarz on Unsplash

Under the motto ‘I am Generation Equality’, this years’ International Women’s Day marks the 25th anniversary of the adoption of the Beijing Declaration on Women’s Rights and Platform of Action. Despite being a core principle of the European Union, equality between men and women is not yet a reality in Europe. With inequalities accumulating as women grow older. While the European Commission has just unveiled its EU Gender Equality Strategy for the next 5 years, we claim gender equality for ALL generations of women!

Since the adoption of the Beijing Declaration and Platform of Action 25 years ago, gender equality has progressed across Europe as a result of several generations of women who, before and since the Beijing Declaration, fought for equal rights. Still, the difference of treatment in the labour market, the unbalanced share of household and care duties, violence against women and girls, are the sad proof that gender equality remains a challenge for today’s generations. The advances towards more gender equality that have been achieved in the recent decades are now under threat in many parts of the world as well as in Europe.

The new generations are joining this journey for gender equality, but this process is not the duty of only one generation. In a society where men and women experience gender inequalities, these differences tend to increase as we grow older and life experiences accumulate. While older women have set the foundations and are part of this ‘Generation Equality’, they also claim equality for all generations of women. 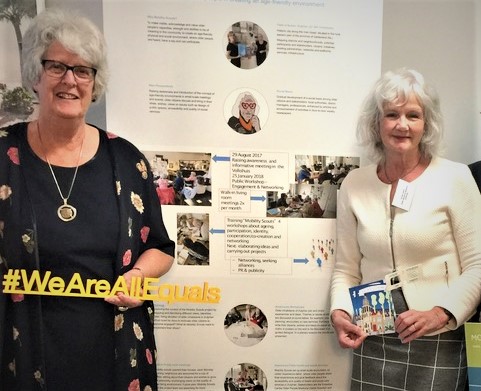 “Although a lot has been achieved in the past 25 years, there is still prejudice, negative stereotyping and a huge lack of knowledge about differences between women and men as they age – about how policies affect women’s daily lives differently, often with negative effects cumulating in old age on their health, social and working lives, income, violence and abuse”, says Laura Christ, from OVN-NL and OWN Europe

Girls, how will you age in Europe?

Older women speak up too!

Increasingly, older women are speaking up against sexism. The multiple discrimination that is well-known of women of colours, for instance, is often also experienced in older age by women that are living the cumulated effect of sexism and ageism.

Recent movements openly denounce the inequalities, violence and abuse women still experience just because they are women. Gender inequalities and violence can take many forms, but they do not spare any generation. Since we started our #AgeingEqual campaign in 2018, we collected many stories of older women testifying of their reality.

Read the new testimonies we collected over the past year as part of the #AgeingEqual campaign:

Where are older women in the European Gender Equality Strategy?

On 5th March, a few days ahead of the Women’s International Day, the European Commission published its European Gender Equality Strategy setting out its key actions for 2020-2025. AGE welcomes the adoption of the strategy and the aims for women to ‘be free, thrive and lead’. On this occasion we would like to remind everyone that older women should not be forgotten in the realisation of the Strategy. Political commitment at highest level is needed to ensure EU action will effectively address equality for women throughout their lives:

With women earning, on average, 16% less than men per hour worked, equal pay in the EU - is one of the European Commission’s top priorities. Along with its EU Gender Equality Strategy, it has launched a public consultation on wage transparency (open until 28th May) and will propose binding measures on the subject by the end of the year, as Commissioner for Equality, Helena Dalli, promised to the press.