Older people and their organisations need to stand together to combat the pervasive ageism and age discrimination that persist in our societies to enhance social justice between generations. That statement was one of the conclusions of AGE Platform Europe’s Annual Conference and General Assembly held on 7-9 June in Brussels. The three-day events looked at how to better protect older persons from discrimination, inequality and abuse under the current and future human rights legislation and instruments. AGE members and external participants commonly acknowledged that, while historically neglected, older persons should be empowered to enjoy the same level of legal protection as any other population or age groups and their rights should be realised and enforced in the EU and globally.

AGE 5th Annual Conference seized the momentum of European Commission’s Year of action on violence against women and the World Elder Abuse Awareness. It explored how human rights in old age can be materialised using the existing policies and legal framework, and considered the added value that a new United Nations (UN) treaty on the rights of older persons would bring. The event brought together around 100 representatives of older people’s organisations, legal experts, European institutions, academia and civil society active in human rights.  Participants took stock of the existing gaps in the protection of older persons. Findings from this exchange provided recommendations for AGE policy work that was used to feed AGE contribution to the 8th meeting of the Open-Ended Working Group on ageing (OEWG), in New York 5-7 July 2017. 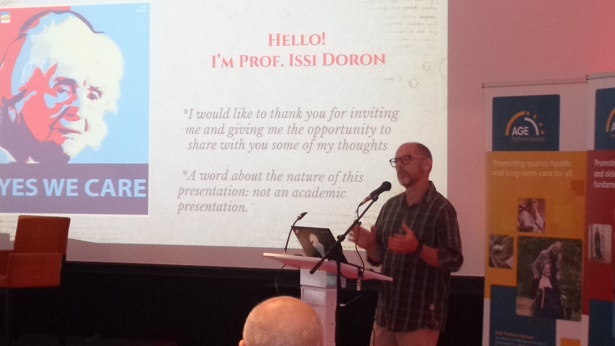 In his thought-provoking keynote speech ‘Ageing, Ageism, and Ageivism: A New Perspective on the Human Rights of Older Persons’ Professor Israel Doron, Head of the Department of Gerontology at University of Haifa, called on older persons and their organisations to intensify their efforts to actively combat the persisting ageism and age discrimination and to enhance social justice within and between generations. Prof. Doron presented key findings from the on-going debate around the need for a new international human rights convention on the rights of older persons. Starting from the historical context to the current developments, he pointed out that, as for women, children and persons with disability, older persons need an international convention to adequately defend their rights, providing them with a visible and powerful political identity. He also insisted on the key role played by older Europeans themselves. To conclude, Prof. Doron once more stressed the need for more political ideology and activism among older persons – what he referred to as ‘Ageivism’ – to effectively advocate for their human rights. “No social change was made without a social struggle”, he insisted.

On behalf of the European Commission, Ana Carla Pereira (DG Employment) and Johan ten Geuzendam (DG Justice) presented the most recent work of the EU around the rights of older people, in particular the proposal for a European Pillar of Social Rights including the work-life balance initiative. 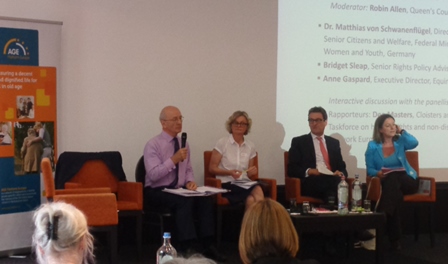 The session on equality and non-discrimination, moderated by Robin Allen from Cloisters, discussed situations of inequality and discrimination that older persons face.  Bridget Sleap, Senior Rights Policy Adviser at HelpAge International, looked at the different areas in which older people experience discrimination, Dr. Matthias von Schwanenflügel, Director General ‘Demographic Change, Senior Citizens and Welfare, from the German Federal Ministry for Family Affairs, Senior Citizens, Women and Youth, referred to the achievements and gaps in German law and Anne Gaspard, Executive Director from Equinet, examined the gaps based on the experience of equality bodies.

On the issue of differential treatment, Bridget Sleap insisted that these should be based on individual criteria, not on age ground. Some participants highlighted the need for the EU to advance in banning discrimination on all grounds in access to goods and services and agreed that treating people differently based on their age needs to be explicitly and specifically justified and not been driven by ageist generalizations.

Summarizing the discussions, rapporteurs Dee Masters, from Cloisters, and Laura Christ, from the Older Women’s Network Europe and member of AGE Taskforce on human rights and non-discrimination, emphasized the lack of meaningful implementation of non-discrimination legislation and the need for instruments to ensure effective implementation. They also pointed out the gaps that exist in addressing the ‘soft’/’shadow’ discrimination experienced by older people and in accessing the information, in particular in rural areas. 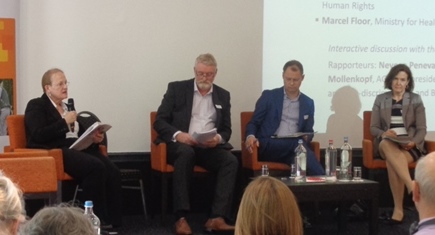 The following discussions, moderated by Bridget Penhale, from the University of East Anglia, covered elder abuse. Jim Pearson from Alzheimer Scotland, Claudia Mahler from the German Institute of Human Rights and Marcel Floor from the Dutch Government highlighted the need to prevent elder abuse by adopting a rights-based approach. They explained the need for society to play an active role in rejecting elder abuse as an unacceptable violation of human rights, as a precondition for more governmental action. Along all discussions human rights were considered not as empty words but real provisions that can help prevent elder abuse if fully implemented in everyday life, including in the delivery of care for older people.

The rapporteurs Nevena Peneva, from the Fundamental Rights Agency, and Dr. Heidrun Mollenkopf, AGE vice-president and member of AGE Taskforce on human rights and non-discrimination, concluded by reflecting on the normative elements brought forward by the speakers and participants, as well as on daily experiences and social realities of older persons.

The conference ended with a training session on the use of the Convention of the Rights of Persons with Disabilities (CRPD) by older persons. Ana Peláez Vice-President of the European Disability Forum, Paula Pinto member of the Academic Network of Experts in Disability (ANED) and Michiel Doeveren from the Dutch National Bank highlighted the relevance of the CRPD for older persons with disabilities and functional limitations and the real impact of such instrument. Ana Peláez explained how the disability movement campaigned to get the UNCRPD adopted and how  older people with disabilitiescan use it to advocate for their rights, how they can work with organisations of persons with disabilities at national and EU level. Presenting the work of ANED on disability and older people, Paula Pinto referred to the EU disability database DOTCOM, collecting information about national laws, policies, strategies and initiatives. Michiel van Doeveren explained the challenges linked to the digitalization of financial and payment services and the risk for exclusion of some population groups, including older persons and they are doing in the Euro Retail Payment Board working group on Accessibility led by AGE. He presented the campaign Pay-Able supporting financial inclusion and encouraged older people’s organisations to disseminate and support this campaign at national level. 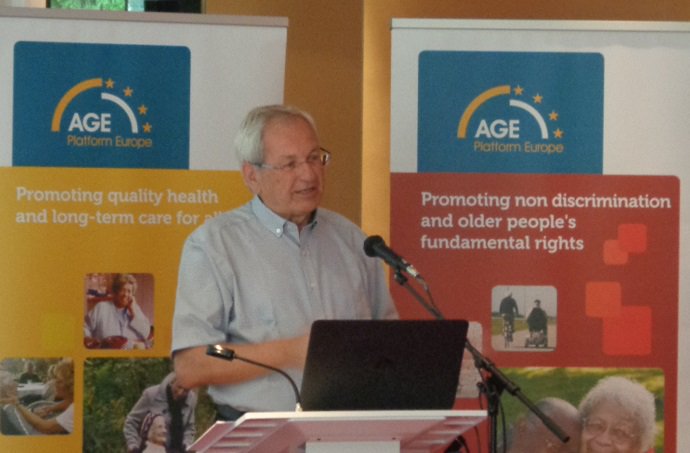 On 8th June, the day after the annual conference, Mr Ebbe Johansen (Denmark) was elected as new AGE President, taking over the reins from Marjan Sedmak (Slovenia). Mr Johansen is a member of the Danish organization, DaneAge-Aeldresagen and has been Vice-President of AGE since October 2013. AGE delegates warmly thanked the outgoing President Marjan Sedmak for all his strong personal commitment and continued work for AGE over the last 6 years. 'Life is long as much as you invest in it', stated Mr Sedmak, whose humanism and humour were unanimously appreciated by AGE members.

The General Assembly also adopted AGE’s new 4-year strategic plan 2018-2021 which was developed over the past year with the active involvement of AGE members and task force experts. The document defines the vision, mission, objectives, priorities and activities of AGE Platform Europe for the upcoming years.

On 9th June, following request by some members, AGE members had the opportunity to take part in four thematic networking sessions on topics suggested by members: old-age loneliness and social isolation; old-age incontinence and dignity; financial elder abuse; and experiences of user involvement in research projects. Conceived to allow members to exchange and learn on their respective work, initiatives or advocacy methods, the networking sessions aimed also to support their future engagement and work at national and local level.