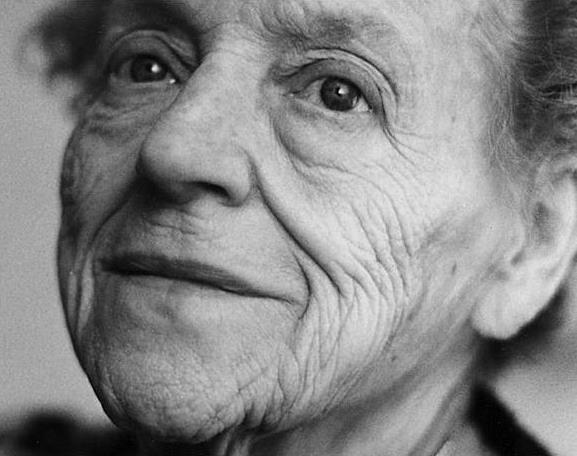 This year’s UN International Day of Older Persons urges for ‘taking a stand against ageism’ and rethink our views and attitudes towards the older generation, underlining the prevalence and detrimental impact of ageism, i.e. the stereotyping and discrimination against individuals or groups on the basis of their age.

Joining the UN call, the World Health Organization joins (WHO) raises awareness of the significant consequences for the physical and mental health of older persons. The negative perception of ageing increases the risk of depression and social isolation in older age and directly impact older people’s health. ‘Unfortunately ageism is extremely common’, states WHO press release, adding that ‘most people are completely unaware of the subconscious stereotypes they hold about older people’. Ageism is everywhere: in the media, in employment, healthcare, access to goods and services, institutional policies, etc. This tends to ‘make neglect and abuse of older persons a social norm and therefore, acceptable’ (WHO).

Ageism is also a reality in Europe (read AGE position paper on structural ageism), leading to a complex schizophrenic situation: on the one side, the active economic and social participation of older people is regarded as necessary to address the challenges raised by the ageing of the population, but on the other side, age discrimination and stereotypes are more than ever prevalent and hinder older people’s inclusion and contribution to society.

This can most obviously be seen in the employment sector, where workers are required to work longer while age discrimination on the workplace is the most reported form of discrimination (as e.g. a recent survey in Belgium shows).

So, most of us would commonly agree that something needs to be done, but what?

To mark that day, AGE organized, in cooperation with the European Network of National Human Rights Institutions (ENNHRI) and the EPP group of the European Parliament, a joint event at the European Parliament on 28 September. The objective of that event was to highlight the pervasiveness of ageism and open the dialogue for an international convention on the rights of older persons at EU level.

A general consensus prevailed among participants that the rights of older persons need to be strengthened. Together with ENNHRI and some of the participating MEPs, AGE believes that an international convention focusing on older people’s rights is required so that older people can enjoy their rights in an equal manner. A new convention will not create new rights specific to older people but will address all the barriers and protection gaps that this group is faced with: e.g. age discrimination in access to services, goods and benefits, inadequate long-term care, age limits in health provision, as well as in acquiring legal residential status as a migrant. All these rights are eroded due to negative images of the older population.

The European Commission, on its side, believes that older persons’ rights should be better protected in making a better use of existing legislation and focusing on their implementation. However they also said that they remain open to further assessment of the pros and cons of a UN Convention. ‘We need more vocal national advocates for a convention on older people’s rights’, stated Johan ten Geuzendam from the European Commission (DG Justice). 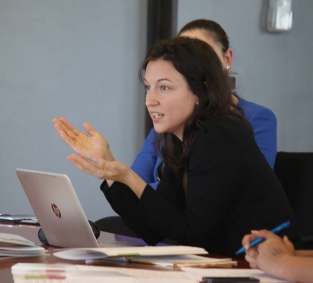 Nena Georgantzi, AGE Policy Officer, pointed out the limit of what can be done with existing tools because ageism, being at the root, is not recognised. ‘We too often think age limits are normal’ she added.

‘People spend most of their career being either too young or too old’, further highlighted Anne-Sophie Parent, AGE Secretary-General, advocating for a ‘global recognition that older people face specific challenges in accessing their human rights’.

Taking the example of long-term care, Lora Vidovic, Croatian Ombudswoman, Chair of ENNHRI, presented the current findings of an EU-funded project being conducted until June 2017, which includes the monitoring of the human rights situation of older people in long-term care across 6 European countries. As part of this project, some practices have been identified which could lead to breaches of human rights, such as the freedom of movement, right to privacy and to autonomy, as well as the right to the highest attainable standard of health. 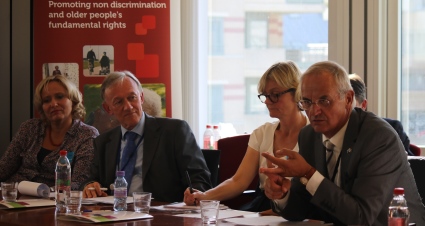 Last but not least, Ivo Vaigl, MEP from the ALDE Group, Vice-President of the Intergroup on Active Ageing of the European Parliament, called for a written declaration of the European Parliament on older persons’ rights, including the potential of a new UN convention. Participating MEPs including Lambert Van Nistelrooij, Jean Lambert and Heinz Becker agreed to explore this possibility internally, as well as take advantage of other occasions to promote the rights of older people in EU action.

The report of the event is available here