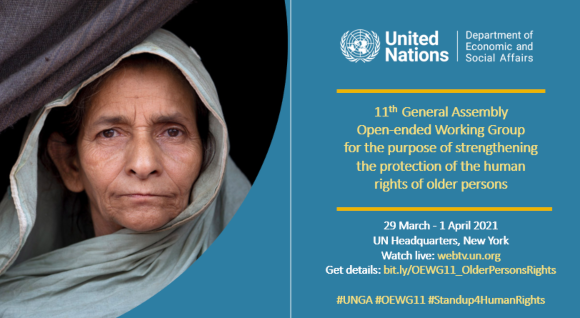 The 11th session of the United Nations' Open-Ended Working Group on Ageing (OEWG) ended last 1 April with mixed feelings. Despite some positive developments, the event did not meet the expectations of ageing advocates worldwide.

The UN Open-Ended Working Group on Ageing (OEWG) is the annual highlight for the global movement that is advocating for a new UN convention on older people’s rights. Expectations were even higher this year, since due to the COVID-19 pandemic, the OEWG had not convened for two years. Civil society organisations were hoping that the scale and severity of the violations of older people’s human rights that we have witnessed around the world during this pandemic would act as a catalyst to move forward.

Encouraging signs of a higher political priority placed on older persons were included in the strong statement of support signed by 146 Member States (including all EU countries), as well as the recent conclusions of the EU Council. Those conclusions reiterated the EU Member States’ commitment to a rights-based approach and the need to close gaps in the protection of the rights of older people.

The 11th session of the OEWG (OEWG11) offered some rich discussions on aspects of work, access to justice, lifelong learning and social protection and provided new evidence about the need to strengthen the global guarantees on the protection of human rights of older persons. Yet, it has not made tangible progress towards a better legal framework to protect human rights in older age.

Against this background, AGE has called on the EU to revise its position for a convention and to be more actively involved in the OEWG.

In the frame of a large UN consultation, citizens across the world asked for ‘the creation of a new UN Convention to protect the rights of older people’. The OEWG11 approved the accreditation of 38 new NGOs (including some AGE members), which demonstrates civil society's rising interest in these discussions. The growing demand for a convention illustrates that states can no longer pretend that a convention is an issue of little interest to their citizens.

To support that demand, AGE launched the #EULeadsTheRally campaign, which aims to mobilize EU member states and encourage them to speak up in favour of a UN convention. Our campaign complements the #AgeWithRights campaign run by the Global Alliance for the Rights of Older People and HelpAge International’s #LessTalkingMoreDrafting initiative, both of which aim to increase political support for a new UN convention and allow the voices of older people to be heard. Our #EULeadsTheRally campaign has been presented in a webinar for AGE members and shared with the delegations of all EU member States at the United Nations in New York.

We also had the opportunity to share our key messages with the cabinets of Vice-President Suica and Commissioner Dalli and the European External Action Service (EEAS) ahead of the OEWG11. In a joint letter that we sent together with National Human Rights Institutions, we asked European governments and the European Commission to actively participate in the OEWG11 and to support the establishment of a drafting group that will develop proposals for a new convention. Our members and partners in this global movement have also used our campaign material to demand further action to put into practice their governments’ commitments to ensuring equal rights at all ages.

The first day of the OEWG11 saw unprecedented high-level representation with the participation of the President of the General Assembly, the UN Assistant Secretary General for Human Rights on behalf of the UN Secretary General, and a video statement from the UN High Commissioner for Human Rights. In her statement on behalf of UN Secretary General Antonio Guterres, the UN Assistant Secretary General stressed that the Working Group should agree on a concrete roadmap that would allow the OEWG to develop, at the earliest possible date, proposals for a new convention. The introductory segment included also for the first time a number of ministerial-level video statements from State delegations (including from Germany, Italy, Malta and Slovenia), alongside statements from government officials (including Austria, Portugal) and from Permanent Representatives in New York (including Spain, France and the UK). The Portuguese presidency spoke on behalf of the EU. Their statement mentioned that the EU and its member states give priority to the human rights of older people and the capacity to make further advancements in the protection of their human rights. They also stressed that older people as agents of change need to be included in OEWG discussions and in responses to COVID-19.

However, despite these initial high-level statements, civil society organisations were disappointed by the absence and lack of engagement of Member States in the panel discussions. It took one hour and 45 minutes for the final meeting of the OEWG to convene, because OEWG11 had not reached the adequate quorum to decide on the procedural aspects of the session. Many civil society organisations expressed outrage on social media for the poor attendance by Member States, which demonstrates a lack of commitment and prioritisation of the rights of older people in practice.

Next steps for our advocacy towards a new convention

We will continue to disseminate our #EULeadsTheRally campaign and help our members to build support for a convention at the national level and hold their governments accountable to their commitments. In the next weeks we plan to organise an online webinar where we will share the main outcomes and insights from the OEWG11. We will then take stock of the learnings of the session to improve our advocacy in the future and schedule next steps together with AGE members and partners.

We will also request meetings with the European Commission and push for further discussion to revise the EU joint position on a convention, which has not been updated even if the context has dramatically changed. We will also try to ensure that older people are consulted at all stages and that they are more prominently involved in OEWG panels and side events.

Finally, we will work with MEPs as well as with UNECE partners to promote the equal enjoyment of human rights in old age and create consensus for a new UN convention.

Want to learn more about AGE contributions to OEWG11?

You will find here detailed information on our oral and written contributions to this 11th session of the OEWG.

For further information on the OEWG and AGE contributions, you may contact Nena Georgantzi: nena.georgantzi@age-platform.eu

Great input by @NenaGeorgantzi with a civil society perspective to this side event about the updated @UNHumanRights study and how to increase collaboration among all stakeholders to support the OEWG in its mandate to strengthen the protection of the human rights of older persons pic.twitter.com/pKrVPeaBzV