United Nations: How the debate on a new convention on the rights of older persons is progressing 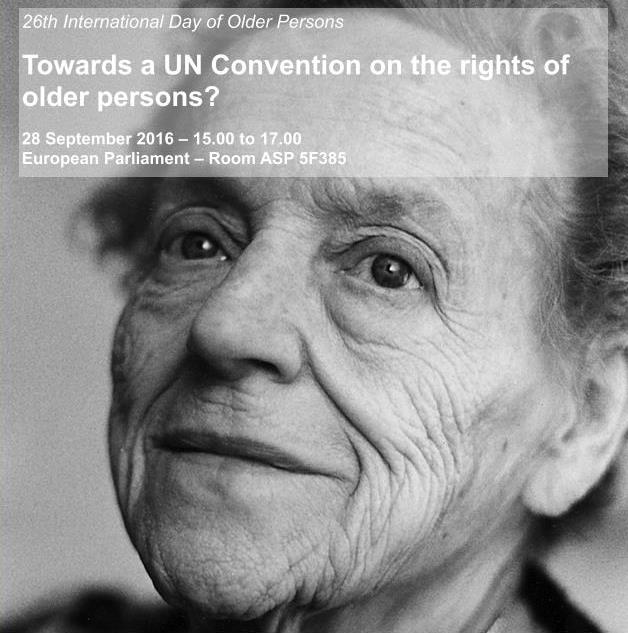 AGE Platform Europe is actively involved in the debate around the need for a new international instrument on the rights of older persons. Through our participation we represent the views of our members in the United Nations. As the discussions are progressing mobilisation at national level is crucial. This Special Briefing gives an overview of the state of the art and makes suggestions about initiating a dialogue within your country.

Origin of the debate

The United Nations (UN) has already adopted a number of thematic treaties, tailoring the human rights that everyone enjoys under the Universal Declaration of Human Rights to the particular challenges that certain groups and persons, such as women, children and persons with disabilities face.

What you need to know about the UN OEWG

In 2010 the UN General Assembly (GA) adopted resolution 65/2010 establishing an Open-Ended Working Group (OEWG) - a forum of Member States, civil society and UN agencies - for the purpose of strengthening the protection of the human rights of older persons. Since then the OEWG meets annually in New York, presenting national and regional developments that improve the situation of older people and discussing what further action the international community might need to take to better implement human rights in old age.

To date the OEWG does not have a specific mission to start drafting a new convention. Nevertheless, a 2012 GA resolution (A/RES/67/139) slightly changed its mandate, asking the working group to consider proposals for an international legal instrument to promote and protect the rights and dignity of older persons. Since then the OEWG follows a twofold approach: on the one hand it assesses how existing laws and policies are applied for older people and on the other hand it aims to consider concrete proposals about what might be included a new UN instrument, such as a convention.

What is a UN Convention?

A UN human rights convention is a form of international treaty,  a legally binding document , whichis enforceable by law, setting It rights for a specific group (for example, on women) or issue (for example, on torture). Any member state of the United Nations can agree to sign up to a UN convention therefore agreeing to abide by its rules. This is known as ratification. Once a country ratifies a convention, it has to adapt its national laws and policies to the content of the treaty or adopt new legislation in order to put into effect the rights included in that treaty.

A new UN convention outlining the rights of older people would not create new rights for this group; it would introduce new international legislation that would explain how the human rights that everyone should enjoy can become a reality for older people.

What has the OEWG achieved so far?

Since its establishment the OEWG has held discussions in key areas of older people’s lives, including discrimination, health and long-term care, social exclusion, social security, violence and abuse and end of life. Based on the proposals made to improve the promotion of older people’s rights, the Human Rights Council appointed for the first time an Independent Expert on the Enjoyment of All Human Rights by Older Persons. The OEWG also considered the outcomes of the Madrid International Plan of Action of Ageing and progress at regional level, including dedicated instruments in Africa, Europe and the inter-American region.

To date there is no consensus to start drafting a new convention but there is steady progress and openness in that direction. The last session which took place in December 2016 in particular signalled a new dynamic in the working group towards more substantive discussion on the possible content of a new instrument.

Is there enough support for a new UN Convention?

Overall, after seven working sessions of the OEWG, while there is general agreement that there are significant gaps in the protection afforded to the human rights of older persons, there is no consensus on whether these should be addressed through a new legally binding international instrument. States are divided between those supporting a new convention, which include primarily Latin American and Carribbean States, more recently joined by several African and Asian countries and those who remain unconvinced about its added value. Most European States belong to the latter front. Slovenia is the only EU country that has called explicitly for a new UN Convention. Nevertheless, Austria and Portugal are involved in the Group of Friends of Older Persons which actively promotes older people’s issues in the UN human rights agenda. In addition, Germany, the UK, Spain and France were particularly active in the last OEWG underlining the need for more substantive debate.  The European Union suggested identifying and analysing existing gaps in the protection of the rights of older people. For the EU such a discussion is necessary in order to identify further appropriate measures. Whilst improving the implementation of existing instruments the EU does not exclude the potential added value of new international norms and they give the example of revisiting the UN Principles on the Rights of Older Persons, which exist since 1991 as a way to do so.

Moreover, in 2016, the UN Independent Expert on the Enjoyment of All Human Rights by Older Persons, Ms. Kornfeld-Matte called on Member States ‘to step up their efforts to determine the best way to strengthen the protection of the human rights of older persons and to consider the various proposals that have been made, notably the elaboration of a convention on the rights of older persons’. Civil society, including NGOs and National Human Rights Institutions (NHRIs) from different parts of the world, are also advocating for a new UN convention.

Why is it taking so long?

This is not the only case where the human rights of a specific group take a long time to gain momentum. The first document on children was adopted by the League of Nations as early as 1924 but it was only in 1989 that the UN Convention on the Rights of the Child was adopted. Similar to MIPAA, the disability community has had since the 1980s a specific World Programme of Action (WPA) on Disabled Persons but only in 2006 the UN CRPD came into force.  These examples illustrate that even though no consensus has yet been reached regarding the need for new convention, this does not necessarily mean that the international community is far from commencing a drafting process.

The developments achieved in the last OEWG are important because they create space for more public debate at the national and EU level. In his concluding remarks the Chair of the OEWG encouraged the organization of regional conferences and dialogues with the participation of Member States, civil society and NHRIs. Already at EU level we have achieved a strengthened focus on the rights of older people in EP events (e.g. September 2016 event) and reports. A meeting organised in Slovenia in 2016 facilitated more constructive discussion at regional level and may be followed up by another one in Austria. The Fundamental Rights Agency will also launch a project on older people in the near future.  In 2017 we will continue the debate with EU institutions, especially with the Council Working Party on Human Rights (COHOM), which decides EU position at the OEWG. Our annual conference will also be an opportunity to engage other organisations and EU countries in this debate.

However, to move forward mobilisation at national level is necessary. Unless governments are called upon by their own citizens they are unlikely to take an active and constructive stand in the OEWG.  Initiating dialogues within your country on the basis of the two focus areas that will be decided by the OEWG will make sure that your government’s position is informed by the views of older people and ensure that the particular challenges of this group are addressed in the international debate. Your advocacy can be based on AGE’s human rights manifesto that was adopted in AGE General Assembly. You can also use the occasion of the review of the MIPAA in 2017 to highlight the shortcomings of this political framework (read AGE report on MIPAA here) and explain what the added value of a binding instrument would be.

To find out what you can do to support this work refer to our December newsflash (add link) and our online self-advocacy handbook.